With Majorca only around two hours away from UK airports, it's a great place to go for a short, adult only break, especially at the beginning of the season when fares are cheap. A couple of weekends ago I went on a four night break, flying out of East Midlands, for just £69 return. The price would've been bumped up considerably had I booked a hold bag, but instead I chose to take just hand luggage. Ryanair have increased their hand baggage limit and instead of taking just one piece you can now take an extra small bag. In fact, according to their display boards at East Midlands you can take the 2 pieces plus a bag of airport purchases - however don't be fooled into thinking that you have the same generous limit on the return as we saw people at Palma airport being told that it was just two bags and witnessed a couple being charged 50 Euros each to check oversized bags in (which were accepted on the outbound flight).

Once in Majorca you may be wondering where to stay, and may be fooled into thinking that you will be limited to the rowdy resorts of Magaluf and Palma Nova if you only want a short transfer from the airport. A few years ago I discovered the upmarket resort of Portals Nous (also known as Puerto Portals), which is around 20 minutes from Palma airport. We found the Costa Portals hotel for just 115 Euros each for the 4 nights, all inclusive. Whilst we didn't take full advantage of the all inclusive status, it was a great base, staff were friendly, the rooms were clean and the pool area was modern (albeit a bit small). 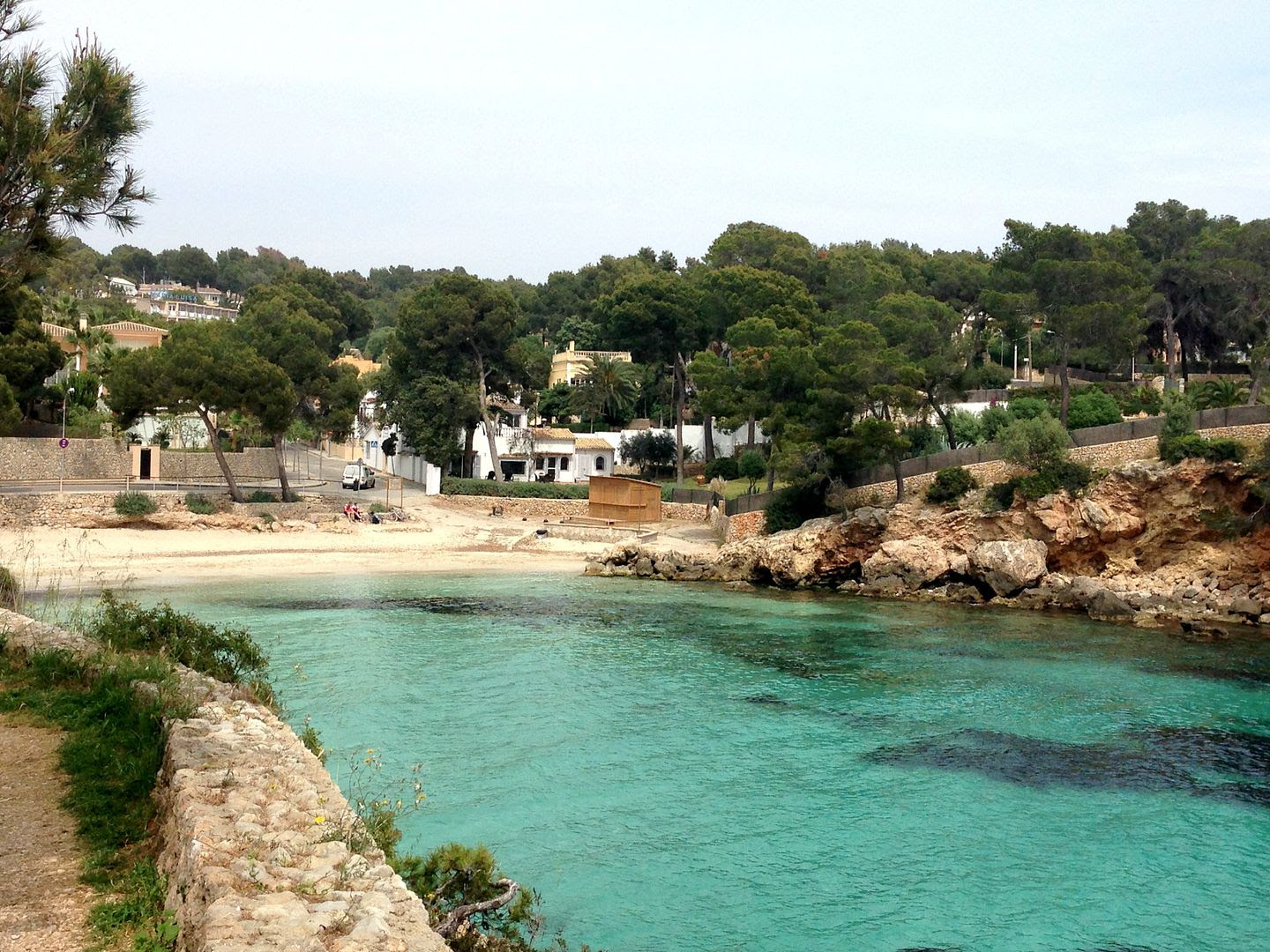 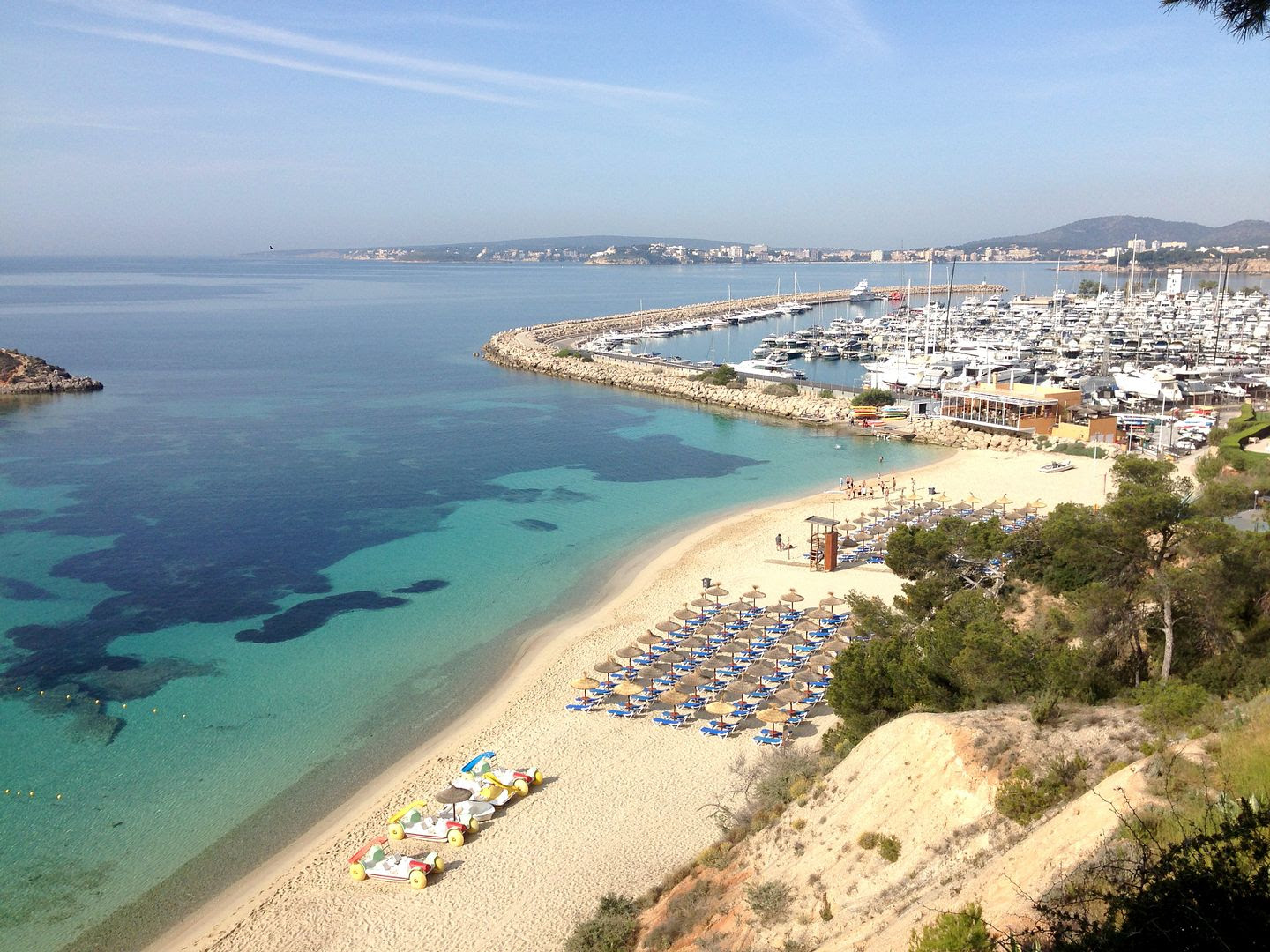 Whilst it's very upmarket in places (particularly the Michelin starred Tristan restaurant and million pound cruisers in the marina), we found places to eat and drink very reasonably, and here are a few that we've tried out.

Situated at the end of the main beach at Puerto Portals the decking clad concrete platform juts out into the clear sea. It looks to have been recently refurbished with very new looking decking and tables & chairs, including a few extremely comfortable loungers.

It's a great spot for watching the world go by, either first thing in the morning or into the evening, and the food and drink is pretty good too. They do a great jug of Cava sangria, which accompanied our chicken salad and filled baguettes.

There isn't a toilet on site but if you ask at the bar for the key you will be presented with a yellow plastic spade attached to a key that will open a toilet door at the top of a steep flight of steps. 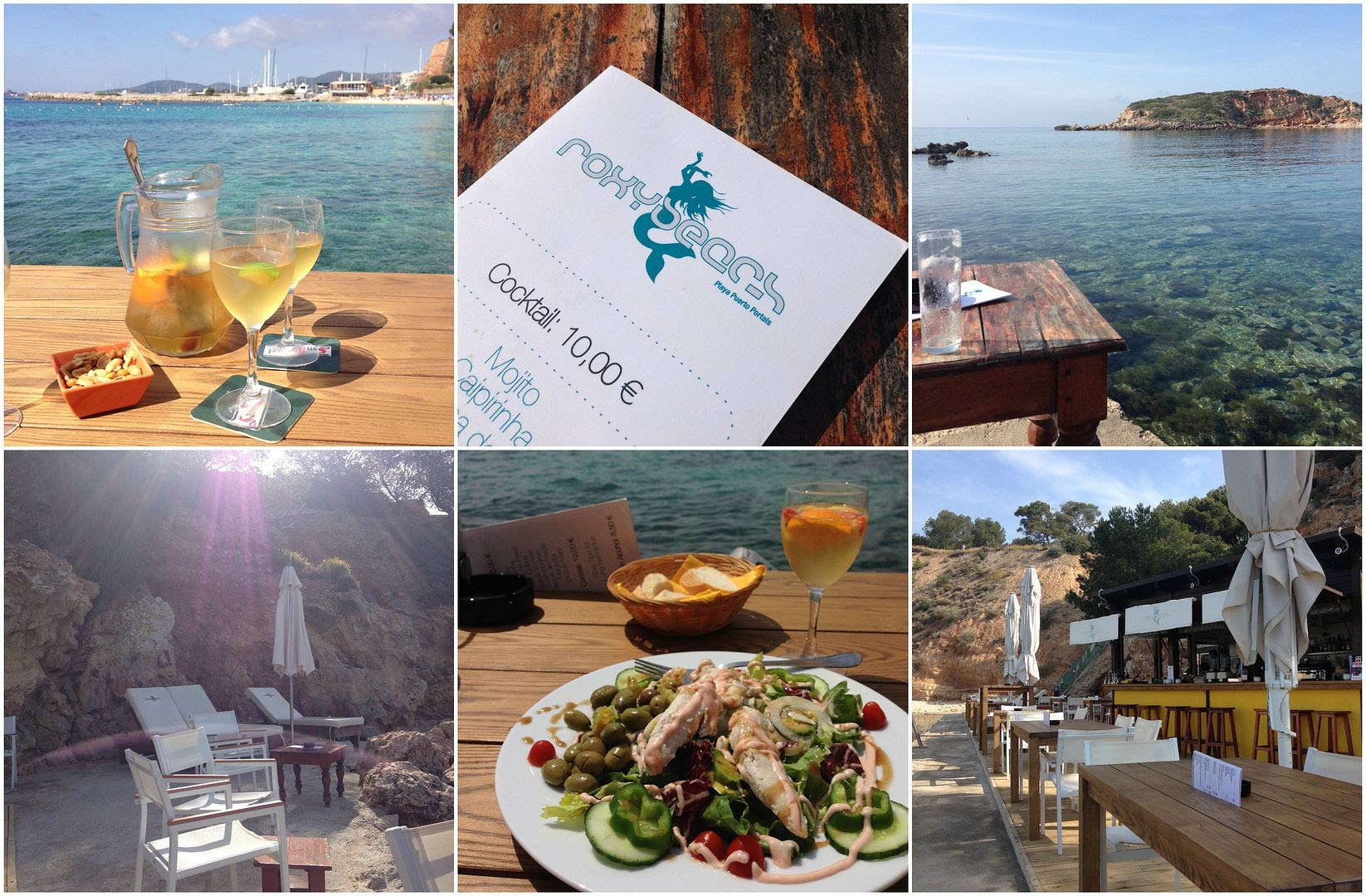 Diablito
We enjoyed a fantastic meal here on the last night of our weekend. The restaurant had a really relaxed yet bustling atmosphere, and we sat at wooden tables in the glass screened area outside, heated by large patio heaters.

We were perhaps a little too hungry when choosing from the menu, and ordered far too much food from the tempting meals on offer, which included fajitas, nachos, pasta, pizza, ribs and wok dishes. It was really hard to choose as everything sounded so good. In the end I settled for the ribs and they were amazing, and fell cleanly off the bone without effort. The prices are really good, considering the quantity and quality of the food.

A few of us went here a couple of years ago early one evening to sample their huge vodka menu, whilst lounging on large comfortable sofas overlooking the Marina. This time we visited late into the evening and enjoyed cocktails, which were served with a plentiful supply of savoury snacks and olives. They also have a very extensive champagne menu, with bottles priced up to 1400 Euros! It was extremely busy evening with a real party atmosphere and loud music. We planned to go back again for more cocktails but after eating our mammoth meal at Diablito our beds were calling us instead!

This restaurant is positioned up in the town rather than in the Marina, and is only a short walk or taxi ride away from the Marina. We first noticed it as it was so much busier than the other restaurants nearby so decided to call in after a couple of drinks in a nearby bar to see what all the fuss was about. The staff were really friendly, and although they were no longer serving meals we did manage to persuade them to serve us some desserts that we spotted in a fridge by the bar. The desserts were nice, but not amazing, and the bright green minty sauce was a bit odd.

We then booked a table for the following evening, and when we arrived we were immediately recognised by the waiter, and shown to the table. The food arrived quickly, but perhaps a little too quickly for us, which left us wondering if it was all cooked fresh to order or not. The meal was nothing special, and although I would return as we had no complaints as the prices and service was good, it isn't somewhere I would immediately rush back to (unlike Diablito).

Escape Lounge - East Midlands Airport
I also have to give special mention to the Escape Lounge at East Midlands airport. As we were only taking hand luggage (and taking advantage of Ryanair's new 2 bag policy) we were able to skip queues at check-in, sail through security (halted briefly by a replacement hip, too many tubes of toothpaste and a stray bottle of sun cream) and head straight for departures, where we took full advantage of the 'maximum 3 hours' policy in the lounge. At a cost of £18.99 per person (minus the 10% cashback received via quidco) it was well worth it for the free wifi, delicious sandwiches, salads, cheese, chutney, pastries and cakes, and of course wine, beer and cider.

You may also be interested in the following travel related posts :

10 top tips for a stress free break (without kids)

a weekend in the English Riviera