Write Your Own Cookery Book in 12 Steps

It's often crossed my mind to write a cookery book, especially as I have a catalogue of hundreds of recipes on this blog, but it's something that would take a lot of time, and currently I don't have much of that spare, but never say never! 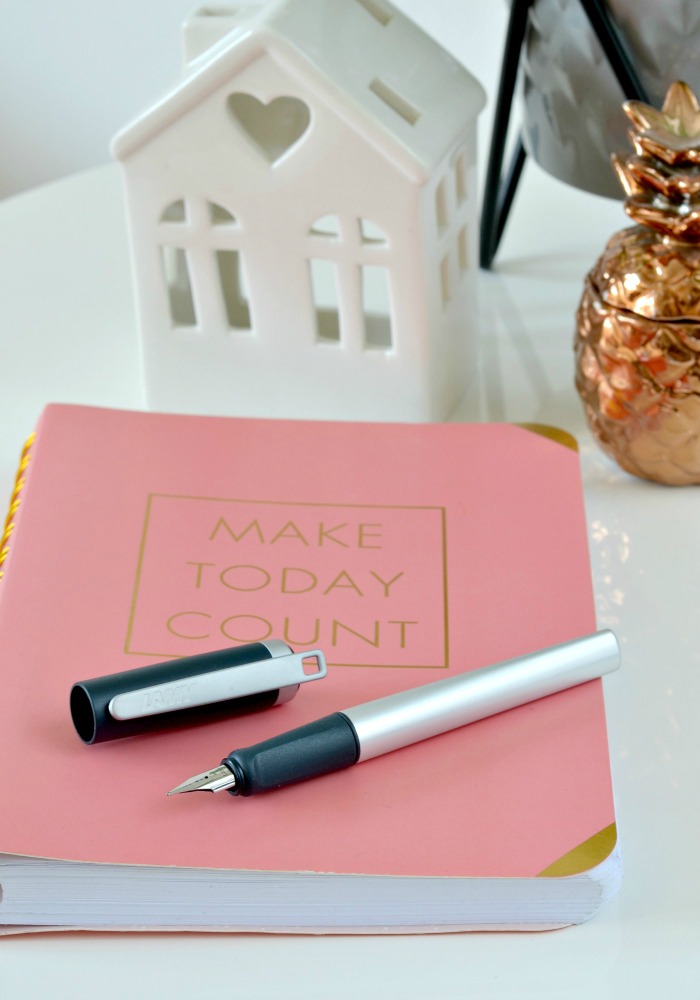 If I do ever write one, I'd definitely like to write the draft old school, with pen and paper, and what better pen could you get than a classic fountain pen. I used to write with one at school, and my writing was always neatest when I used it on a fresh page of a brand new exercise book so I was thrilled when Lamy sent me one of their Nexx cartridge fountain pens in anthracite.  Comments from the kids ranged from 'that's not a real pen' to 'how does it work'. Kids of today have no idea of the struggles we had filling pens from a bottle of ink! Thankfully this fountain pen comes with ink cartridges to make refilling a breeze, and a lot less messy. 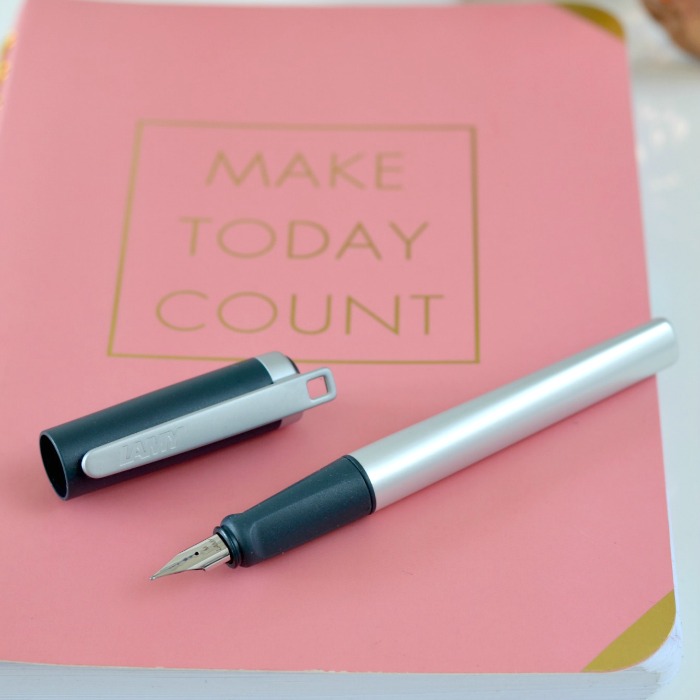 In the steps below, written on behalf of Lamy, you can get some pointers on writing your own cookery book. If you have any tips to add please feel free to let me know!


in collaboration with Lamy

Posted by Helen at 10:10 0 comments
Email ThisBlogThis!Share to TwitterShare to FacebookShare to Pinterest
Labels: collaboration, stationery, writing a cookery book

Anyone that reads my blog regularly, or has been following for a while, will realise that I'm all about making everyday meals simple. That doesn't mean grabbing a ready meal and popping it in the microwave, even on the busiest of days, but I do like the odd shortcut or two.

My kids love a pizza on the weekend, and I usually keep one or two in the freezer so the teens can feed themselves. Frozen pizzas aren't always the best tasting, but the kids don't seem to mind, as long as it's quick and hassle free. This semi-homemade Sweet & Smokey BBQ Chicken Pizza is not only quick and hassle free to make, but it also tastes great, and a lot better than a frozen one.

It doesn't take long to make your own pizza dough, but if you really don't have the time then a store bought pizza base, flatbread, naan bread or tortilla wrap works just as well. For this recipe I used a large ready made pizza base, but at the weekend my friend told me about large garlic & coriander naan breads that Iceland are selling so I'm going to give them a try for the next pizza I make.

I cooked the pizza on a preheated pizza stone on the BBQ, which gives the base a slightly smokey flavour, and then finished off under a hot grill, but cooking in a hot oven works well too.

Jack Daniel's Smokey Sweet Barbecue Glaze is ideal for coating the chicken strips on the pizza, as it not only adds a sweet and smokey flavour to the chicken, but it also slightly caramelises when it's cooked under a hot grill. 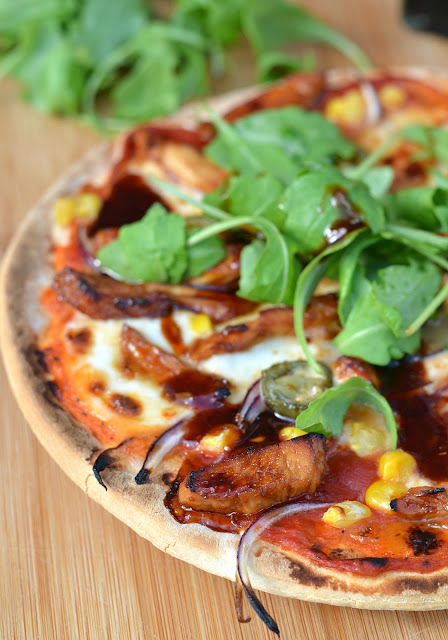 Along with the sweet & smokey bbq chicken, I topped the pizza with mozzarella slices, sweetcorn, jalapenos, rocket and an extra drizzle of BBQ sauce, making this an ideal quick and easy midweek meal for the family - even the teens could make it, and in less time than it takes to cook a frozen pizza! 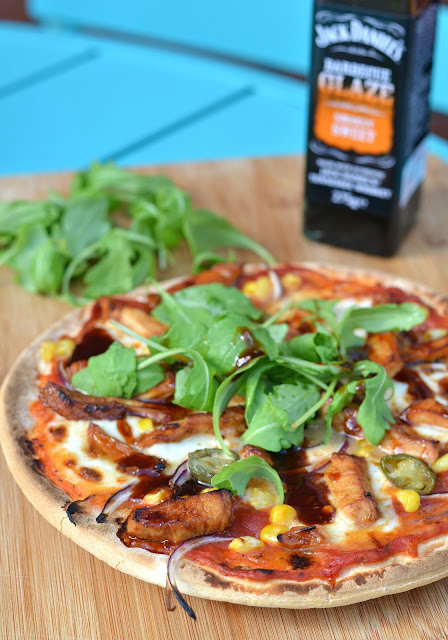 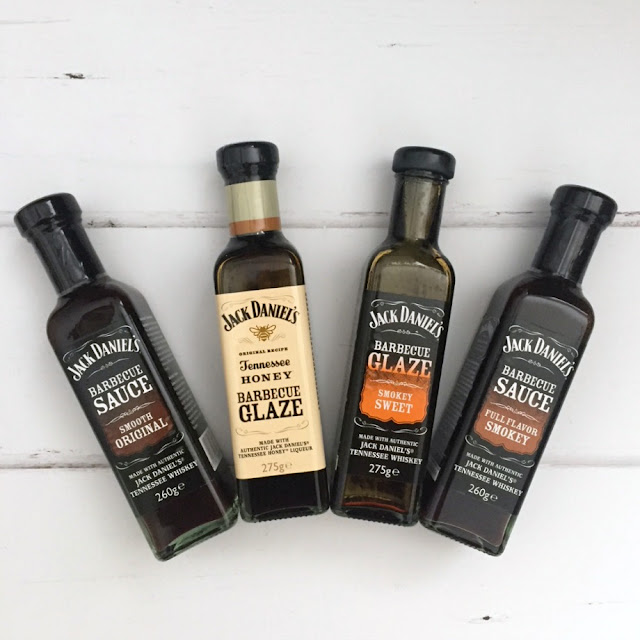 Jack Daniel's make a variety of barbecue sauces and glazes that are great for dips and marinades this bbq season.

It's been a busy old week this week, starting off with a [successful] trip to watch football at Wembley and a catch up with old friends and family, and ending with a day of housework and baking today, with a job interview, spot of work and juggling family life and half term in between. Thank goodness that the weather has been mostly good and the kids have been spending a lot of time outdoors playing football.

Last night I had a bit of a fright when I was closing the kitchen door for the evening, around 11.30, and almost squashed a frog in the doorway. I'm a bit of a wuss when it comes to handling creatures so went to call for assistance. The eldest was still at work, middle child was at a friends, husband was away and youngest and his friend were fast asleep, but thankfully the eldest's girlfriend was still awake, but by the time we came downstairs the frog had hopped inside! Many comedy movements later and we'd managed to get the frog back out of the door with the assistance of a couple of flip flops. Hopefully it managed to make its way back to the pond sometime in the night, but I'll be keeping the doors closed tonight just incase. 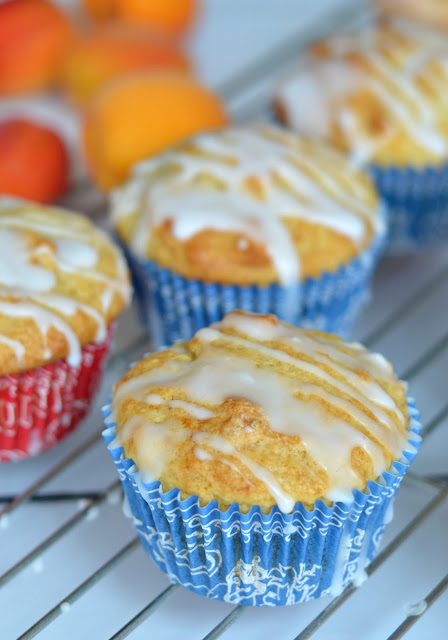 A few weeks ago I started to have a weekly fruit box delivery from local business, B Taylor Fruit & Vegetables, and we've been enjoying loads of lovely fruits, including many that I wouldn't usually buy. This week we've received donut peaches, kiwis, apricots and strawberries along with the regular bananas, apples, grapes and oranges. It's a great way to enjoy seasonal fruits and the kids are loving the selection. I decided to use a few of the apricots to make some muffins for a friend who had a bit of an accident over the bank holiday, in the hope of bringing a little cheer to her. The recipe is nice and simple and a great one to make with the kids as it just requires a little mixing. The baked muffins are delicious straight from the oven with vanilla ice cream or custard, or left to cool they can be drizzled with a little icing. 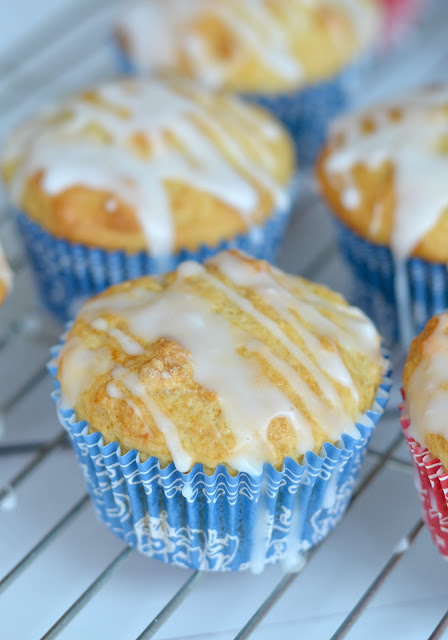