How to Create a Sideboard with Tapered Legs using IKEA Kallax

I love Ikea and we have many pieces of furniture and storage throughout the house bought from the store. In fact, I don't think there is a room in the house that doesn't contain at least one thing from Ikea, whether it's a picture frame, a shelf or desk. I like the clean, modern look of many of their products, plus the price is always an added bonus.

Over the years we've bought a few units in the Expedit range, which has now been superseded by a slightly slimmer Kallax. A few weeks ago we ventured off to Ikea on a Sunday afternoon (crazy, huh?), with the aim of bringing home 4x2 and 2x2 Kallax units in turquoise for the kitchen, but when we took a look at it in the showroom I didn't think the colour was quite right. I then spotted the 4x2 in grey and wood effect and I was in love! Unfortunately they only do this size currently so my hopes of having the two pieces standing alongside each other (with the 4 x 2 on its end) were dashed, but we bought it anyway! Incorporating Orange Juice into your child's diet, and a recipe for Breakfast Muffins

With having teenagers I know that it can be particularly tricky to make sure they get enough fruit & veg in their diet. On the whole, mine are pretty good with vegetables, but teenagers are naturally lazy and it takes too much effort to peel an orange or bite into an apple. If I cut the fruit up & make a bowlful of fruit salad they will help themselves and eat the lot in no time, but I don't always have the time (or inclination) for all that faff.

By having a carton of orange juice in the fridge I know that all three kids can easily get themselves at least one of their 5 (or is it now 10?) a day with their breakfast, without too much effort. Just one 150ml glass or 100% pure orange juice can provide children with one of their 5 a day, as well as being a good source of vitamin C (100% RDA), potassium and folates. Vitamin C is essential for a healthy immune system, and potassium & folates help with cell and muscle tissue repair. Consuming orange juice with a meal can also help to increase the absorption of iron rich foods such as fortified cereals, which makes breakfast an ideal time to have it.

If you have teens like my daughter though, more time in the mornings will be spent doing hair and makeup than thinking about breakfast, so these Breakfast Muffins make an ideal grab and go solution. Teamed up with a small bottle or carton of the recommended 150ml serving of orange juice, it makes a perfect breakfast. The muffins can be made the night before and packed up in a lunchbox ready to grab before running for the school bus.

Ingredients in the muffins can be tailored to suit. These have veggie sausages, pepper, onion & tomato in, which can be replaced with bacon, mushrooms and spinach, for example. 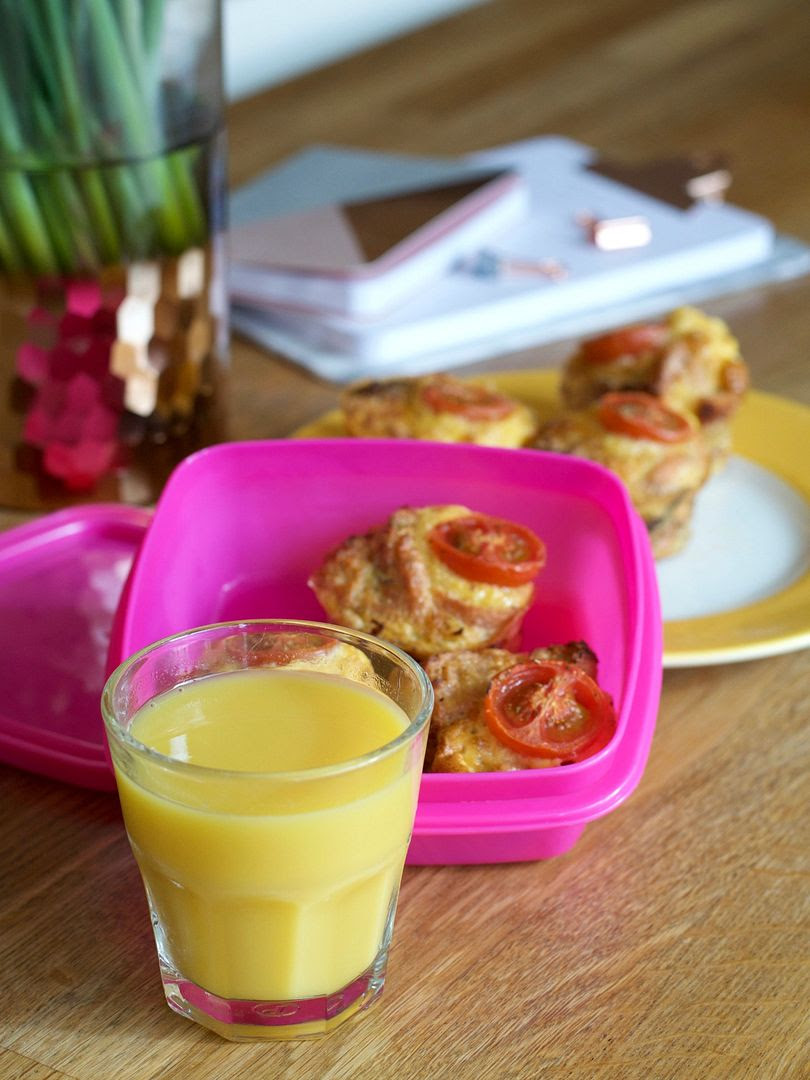 Easter falls a few weeks later this year than it did last, which means that we have a bit longer to stock up on all the Easter chocolate and baked goodies in the shops. Hot cross buns are an Easter treat that I enjoy perhaps even more than chocolate, and as the kids love them too we get through packets of them over the Easter period. The first time I made my own hot cross buns was at school, during one of the many dreaded cookery lessons. I wasn't at all bad a cooking but that teacher put the fear of god in us if we didn't scrub those pans until they were like new, so I'm surprised that I didn't get put off for life. Whilst I do enjoy making bread, it's definitely only for those days when you have a bit of time on your hands, so I'm always searching for short cuts and ways to make the process easier.

A few years ago I discovered Focaccia making, which involves barely any effort at all to produce an amazing tasting loaf. I then adapted the recipe a little and came up with a Cinnamon Apple Focaccia, which was equally as good as its garlic & rosemary predecessor. This got me wondering if I could perhaps use the same basic recipe to make hot cross buns. I replaced the olive oil in the focaccia recipe with melted butter, and with the addition of dried mixed fruit and mixed spice, this delicious hot cross bun loaf was born. 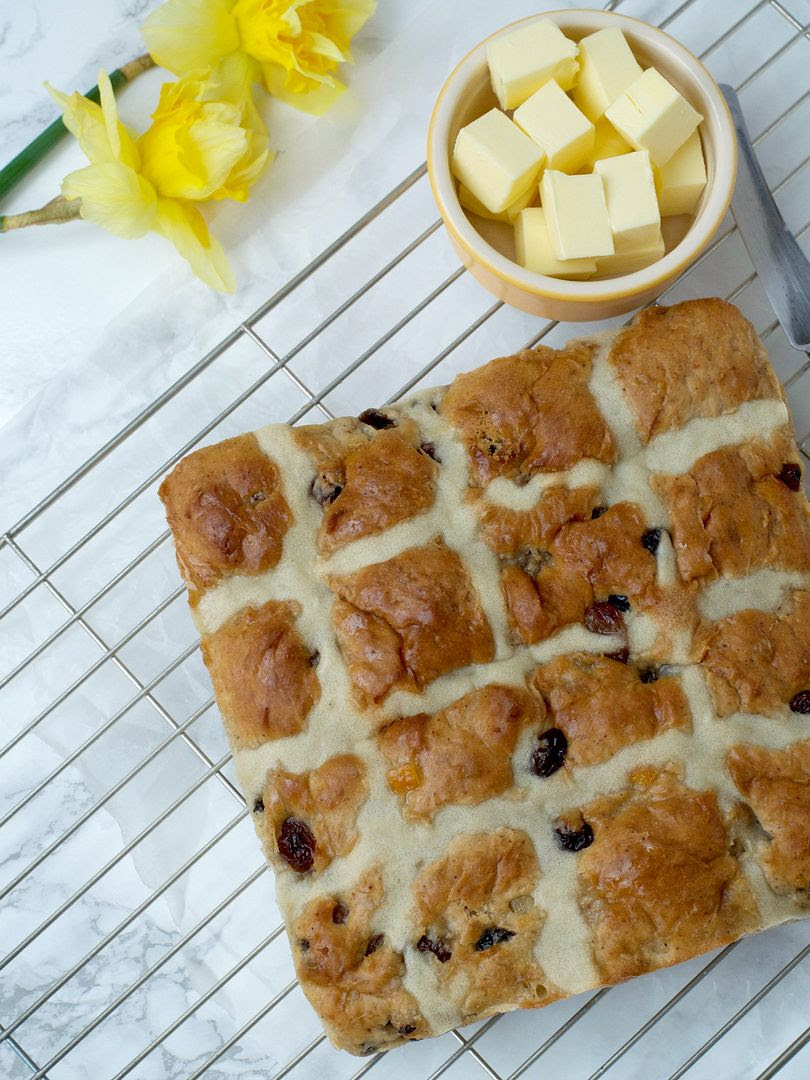 One of the most popular meals in this house is Bolognaise. Whether it's served with spaghetti, penne pasta or on top of a jacket potato, the family loves it, although the eldest doesn't like jacket potatoes as he 'doesn't see the point of them'. I usually humour him on a jacket spud day by slicing his into wedges, topping it with whatever we're having, chucking some cheese on the top & baking it in the oven. He eats it, he loves it, but he still doesn't see the point of a jacket spud. I honestly give up with teens. Don't get me started on the second one that has now added ham to her ever increasing 'dislikes list', along with mushrooms (but eats them all in bolognaise despite them being clearly visible), tomatoes (but they're ok cooked), steak (it's too meaty), pork (it's too porky). You get the picture. 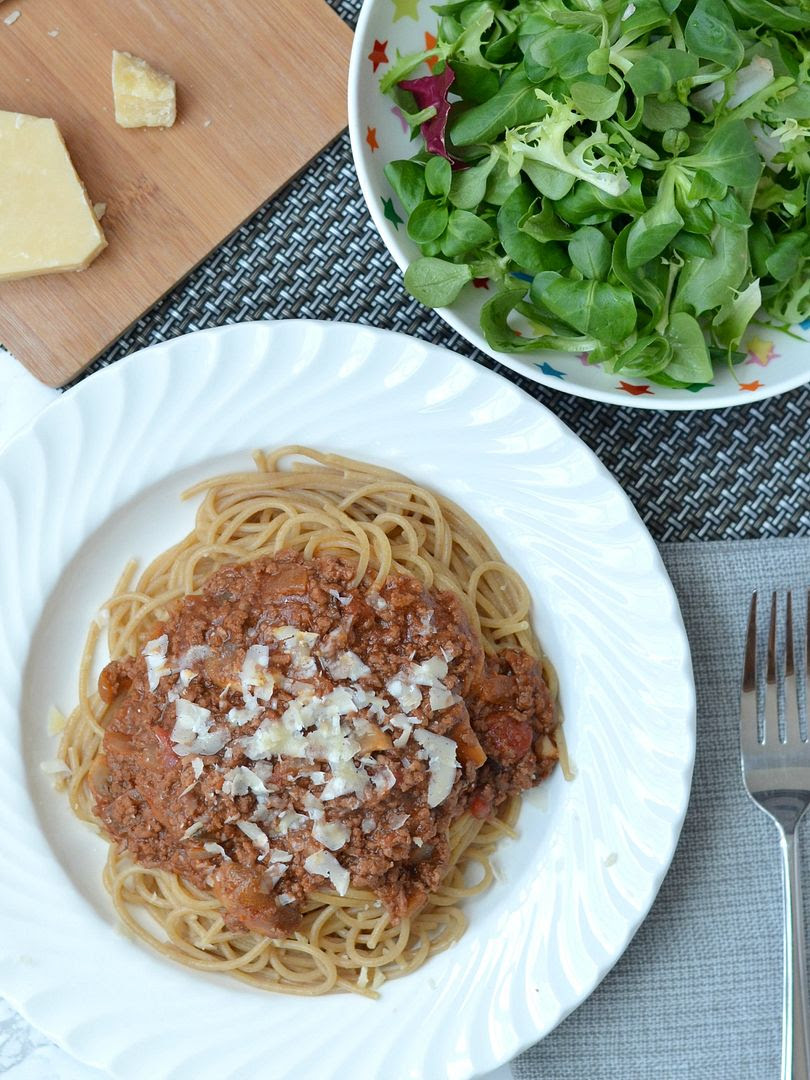 Anyway, back to the bolognaise. I usually make it from scratch with tinned tomatoes, tomato puree, herbs etc, but there are times when I need a meal in a hurry and a jar of sauce makes perfect sense. I must admit though, that Dolmio is not a brand of sauce I pick up, and I was quite surprised to learn that a 500g jar of Dolmio sauce contains at least 10 juicy diced tomatoes, along with a few other natural ingredients, with no artificial colours, flavours, preservatives or sweeteners. I was then interested to see how it would taste, and if it would pass the fussy teen test. 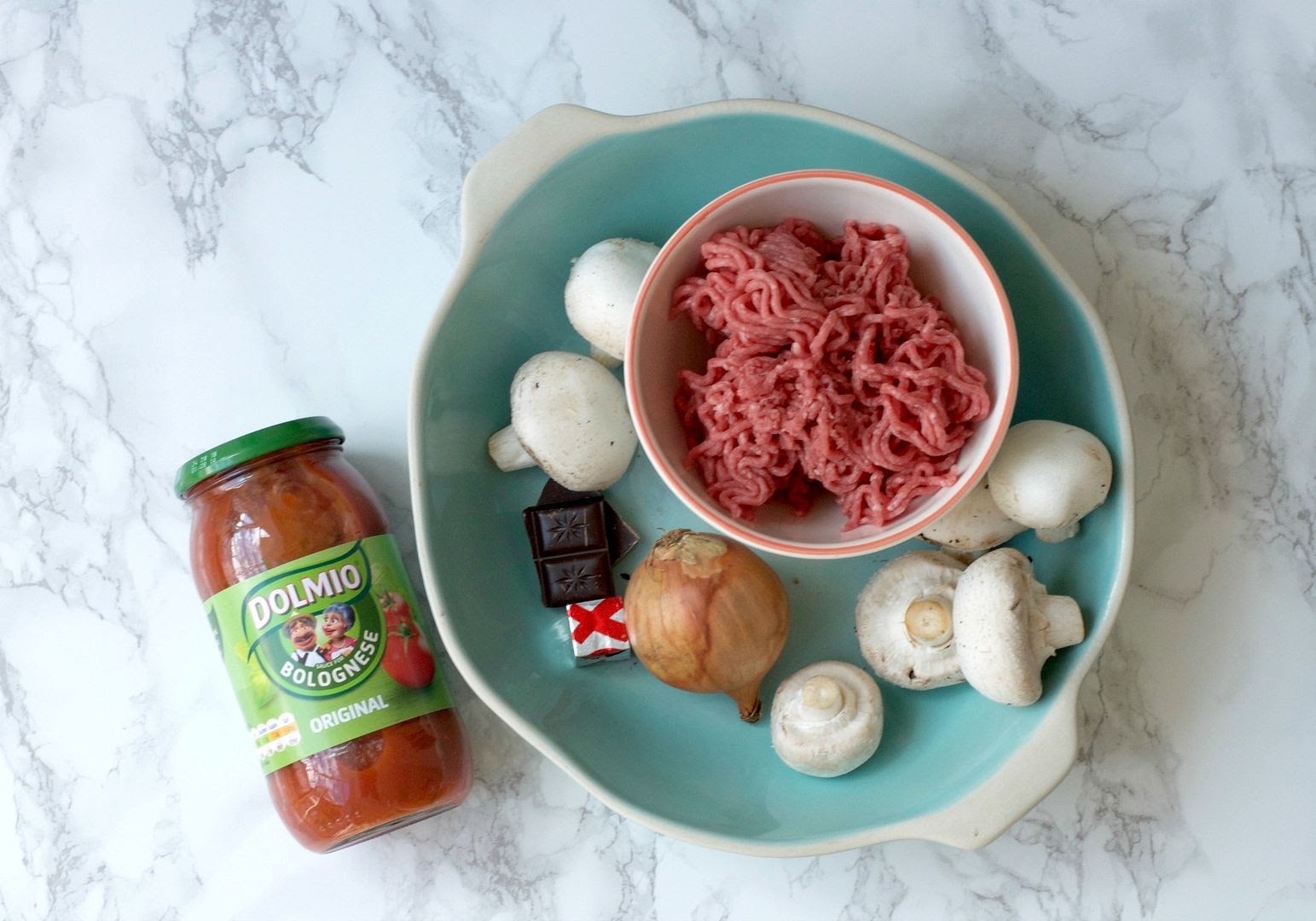 With just a few additions I rustled up a tasty Spag Bol in just 25 minutes (including pasta cooking time), and it made enough for 5 portions. Everyone loved it, and plates were cleared (including all the mushrooms!) 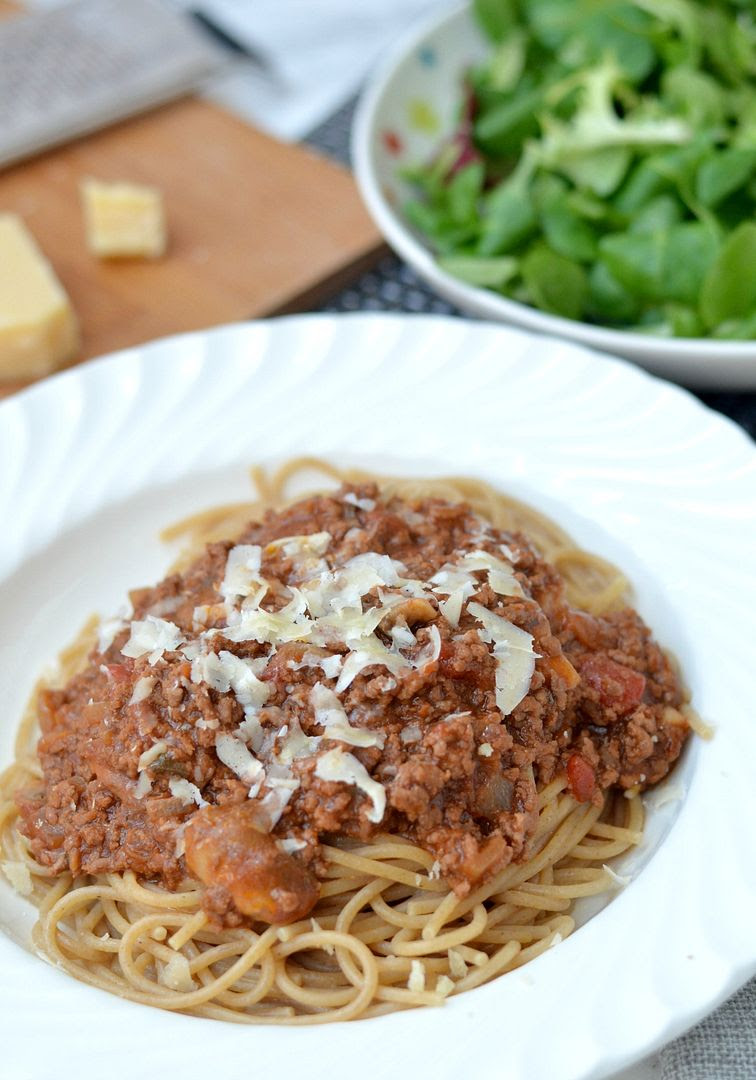 
I saved one of the portions to make stuffed peppers the following day, and spiced the bolognaise up with some chilli powder and added a few kidney beans. 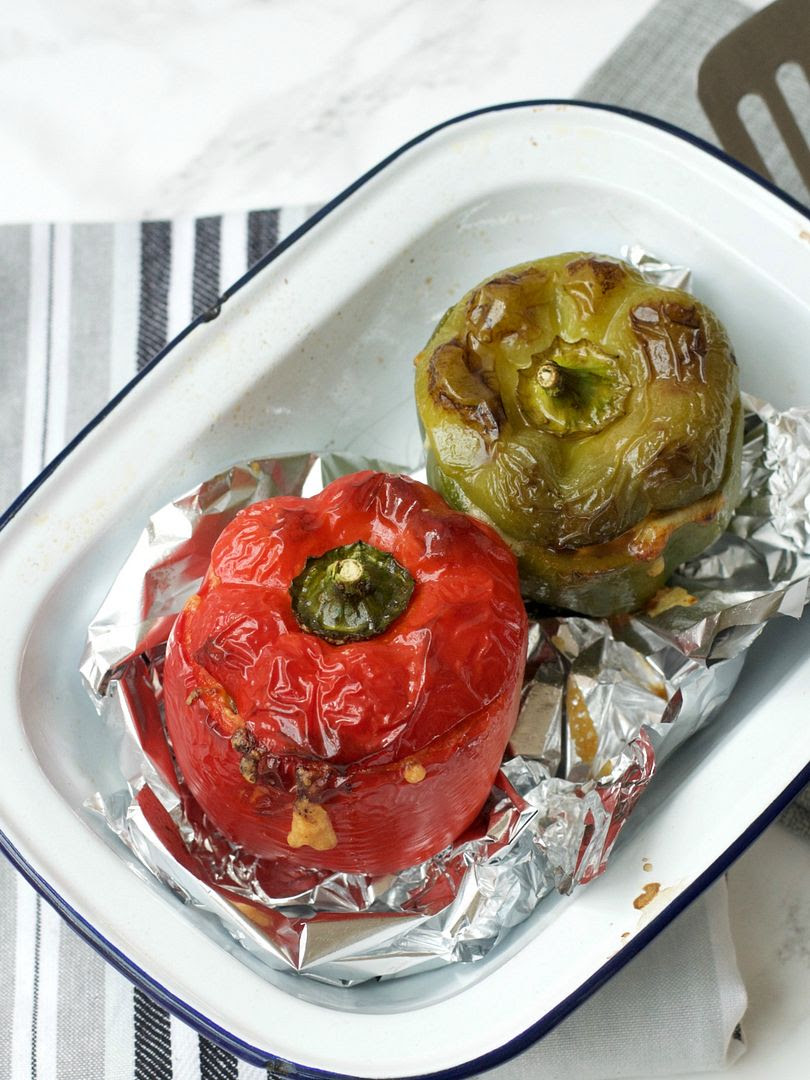 The stuffed peppers were a big hit with the husband who ate them both!

This post is an entry for the #Dolmio #Thankgoodness Challenge, sponsored by Dolmio

Whether you love it or hate it, everyone has heard of SPAM. What you may not know is that SPAM Chopped Pork & Ham is primarily high quality pork shoulder meat and ham (hand cut off the bone). These are then ground together with water, sugar and spices before cooking in the can (which gives it the long shelf life), and contain a whopping minimum 90% meat, which is a higher content than many supermarket sausages.

SPAM is a handy little can to keep in the pantry, for those days when the cupboards are almost bare, to make a meal in minutes. I've previously shared recipes for BBQ Bean & SPAM Pie and SPAM Paella, both of which went down extremely well with the rest of the family.

The SPAM website is full of many more recipes, including this SPAM Tear n Share, which would be great at a bbq or Friday night feast in front of the TV. 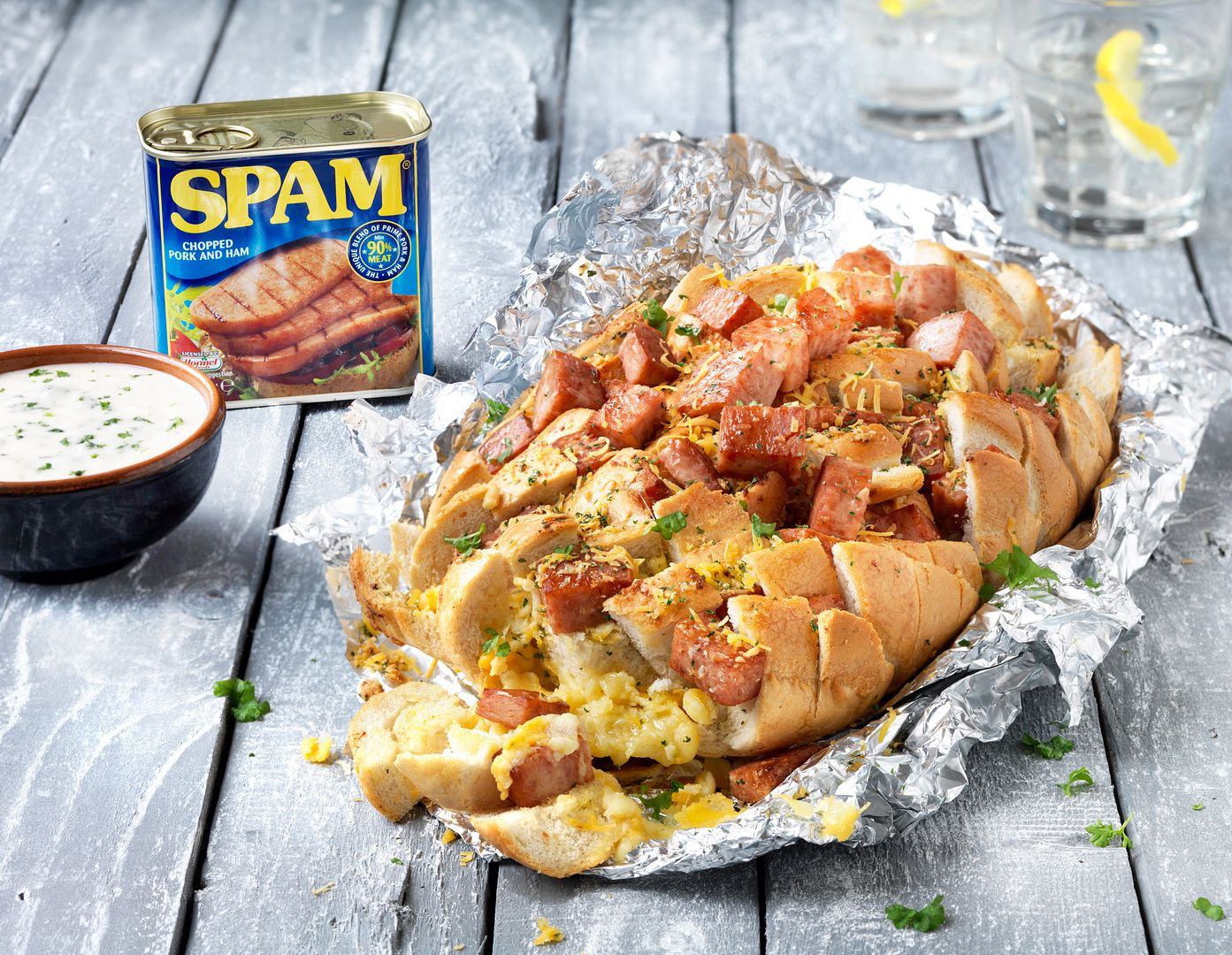 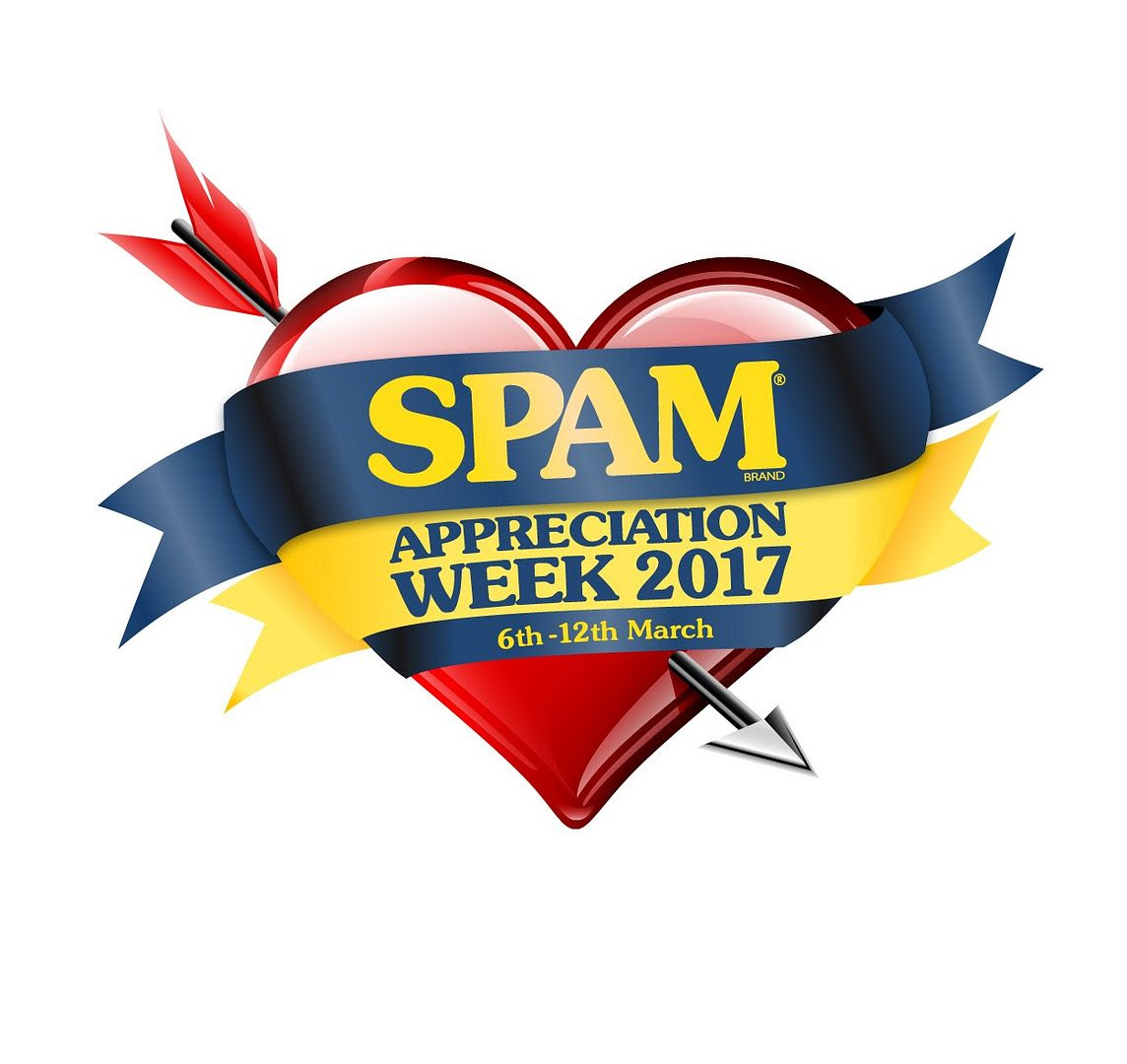 As it's the official SPAM Appreciation week next week (6th - 12th March) I will be giving away 5 sets of SPAM goodies containing an apron, a spatula and a SPAM slicer (pictured below), which also include your very own can of SPAM so you can try out some of the delicious recipes for yourself.


I have 2 sets to give away via the Rafflecopter form below, and 3 further sets that I will be giving away during the week via my Facebook, Twitter and Instagram accounts, so make sure you're following me, and keep your eyes peeled throughout SPAM Appreciation Week for those!

SPAM are also giving SPAM lovers the chance to win a VIP weekend in Liverpool for the launch of the SPAM 2017 Tour, plus £250 spending money - see here for more details. 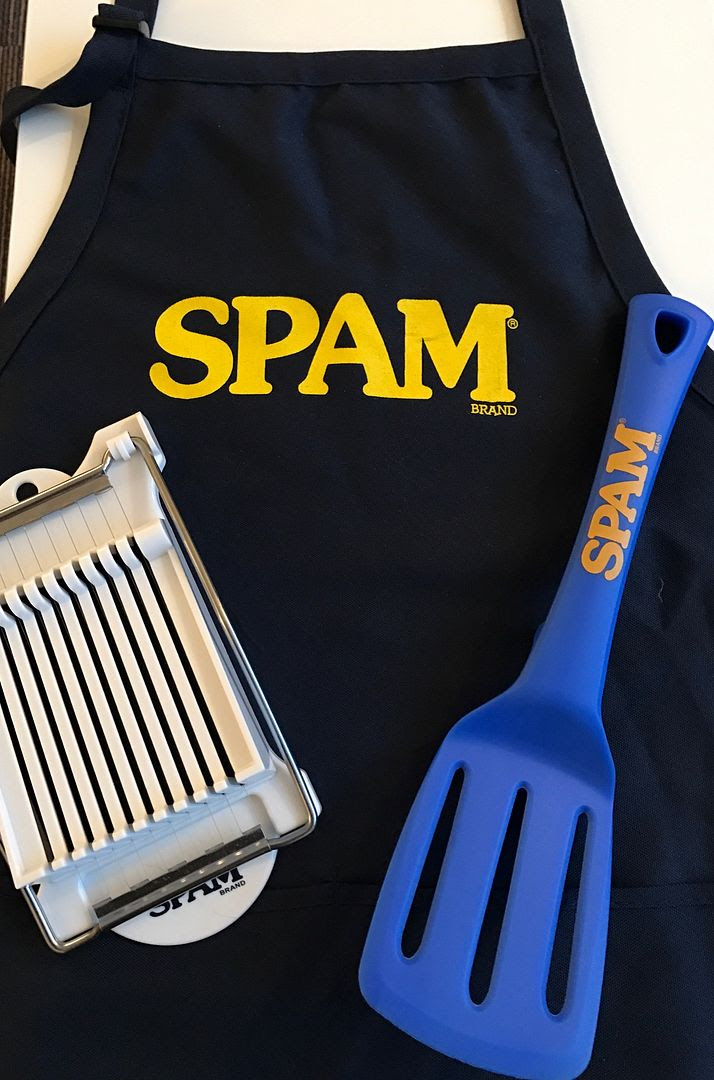