These days I don't tend to take any of my cookery books off the shelf for reference. Instead I've been sucked into the electronic age of reading cookery magazines online, Googling recipes, and spending hours on end drooling over Pinterest, so I was a little hesitant at first about reviewing My Family Kitchen by Sophie Thompson. Sophie is an award winning actress, as well as being the winner of Masterchef 2014, and has put together the book with recipes that have been handed down, invented, begged, borrowed, and then made her own.

If I was to dabble in the world of cookery book writing then this is the style of book I would like it to be. It contains lots of family photos, tales and humour, along with having a relaxed and fun attitude to cooking, and the recipes are (as it states on the back of the book) fuss-free, easy to follow and delicious, and I couldn't argue with that.

I'll definitely be trying a few of the recipes over the coming weeks and months, such as 'Ma's Devilled Cheese', 'Sweet n Sticky Nutty Chicken' and 'Three Choc Button Brownies', but for now I've chosen to make 'State Skool Mess'.

"I think in a recipe book it's probably wise to avoid talking about religion, politics and education - best just stick to the staff of life.....Bt why should Eton have all the fun? Let's redress the balance!"

I absolutely love this idea, and it's the kind of dessert that happens in my kitchen on a regular basis. I'm sure it was originally made with whatever ingredients Sophie could get her hands on, but I love the way the recipe is now so specific - '1 pink and 1 purple Party Ring'.

As Jack doesn’t like raspberries I chose to serve it with strawberries instead, and I was forced to improvise with the sauce as my online grocery shop delivered Twix bars instead of Mars, so I sliced the caramel off & used a Milky Way too. 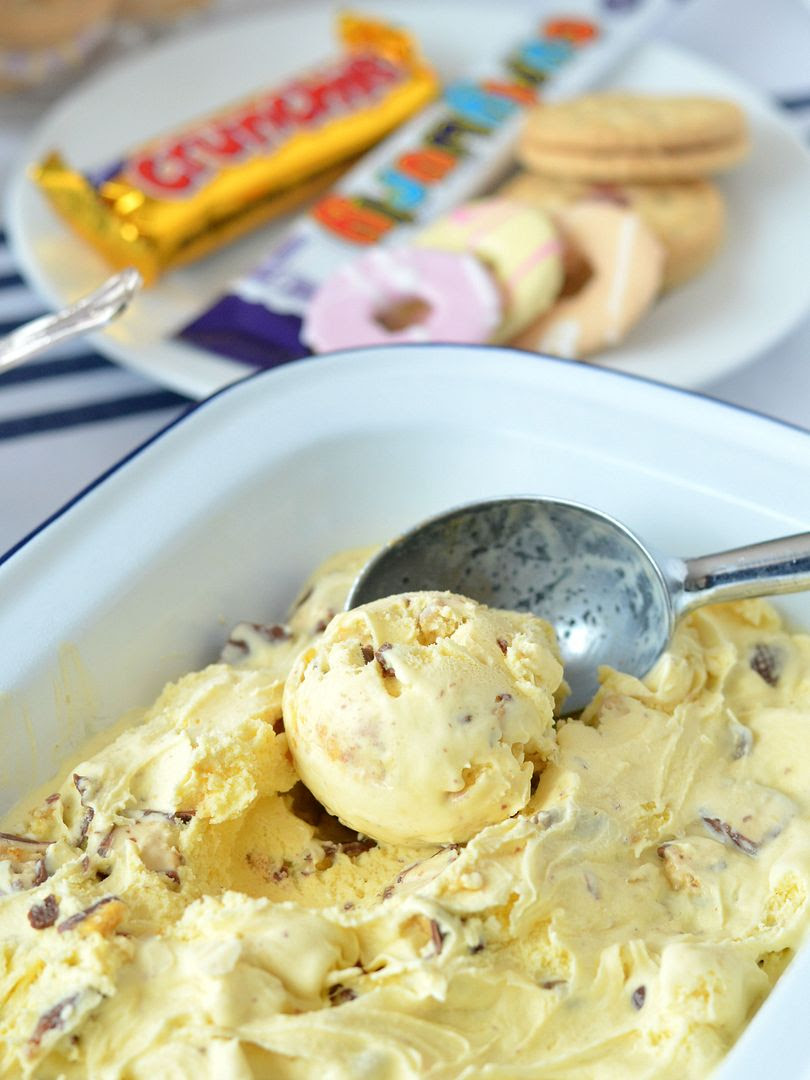 Take the ice cream out of the freezer and leave to soften just enough so that it becomes stirrable. Scoop the lot into a large mixing bowl and add the Curly Wurly, Milky Ways, Crunchie, Jammy Dodger and party Rings. Stir until it’s all mixed together and then spoon back into your ice cream carton (curiously, you will find that it does fit back in).

When you are ready to serve, melt the Mars bars in a bain-marie (a heatproof bowl set over a pan of just-simmering water). If a bain-marie feels like too much effort, just melt in a pan over a very low heat with a splash of milk – this will take about 5 minutes.

Scoop your customised ice cream into bowls, pour over your Mars bar sauce and scatter a few raspberries over the whole shebang.


I knew my kids would love this one, and now that I've introduced them to Party Rings I don't think there will be any going back! 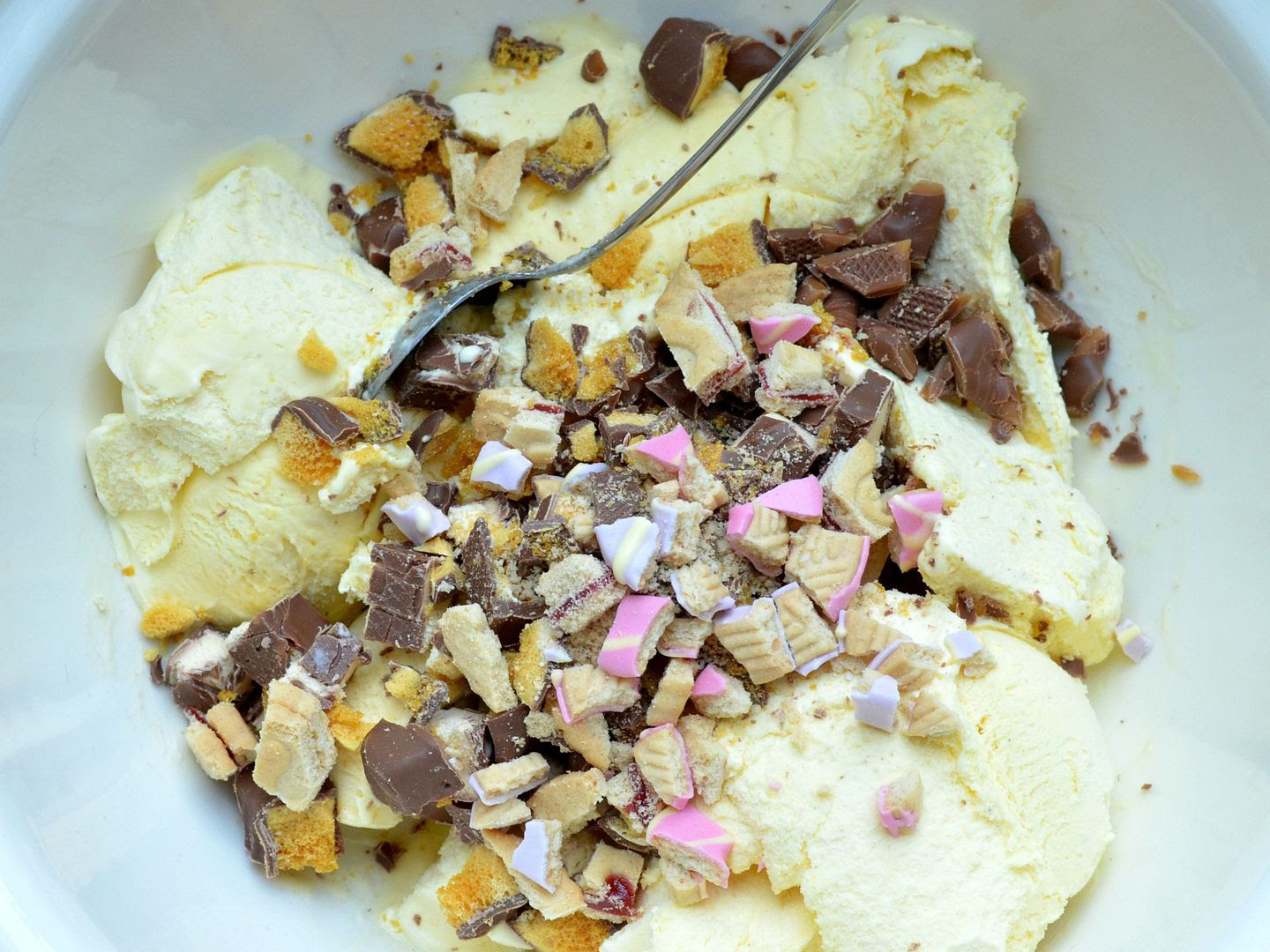 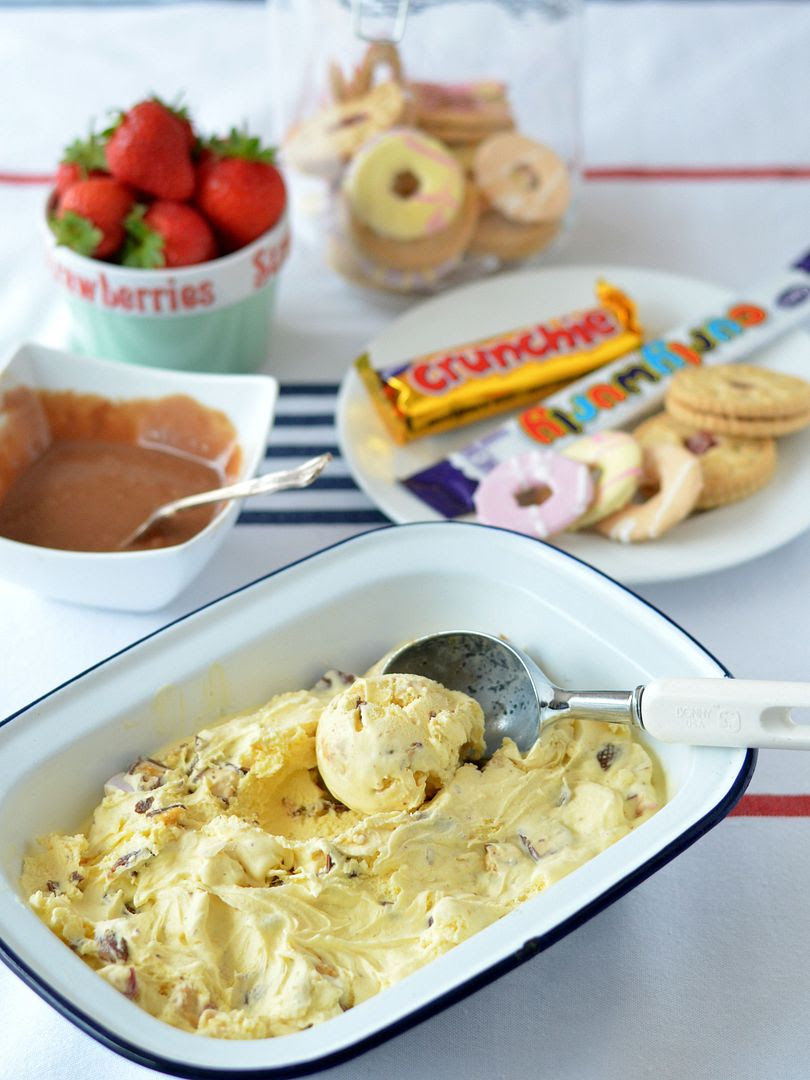 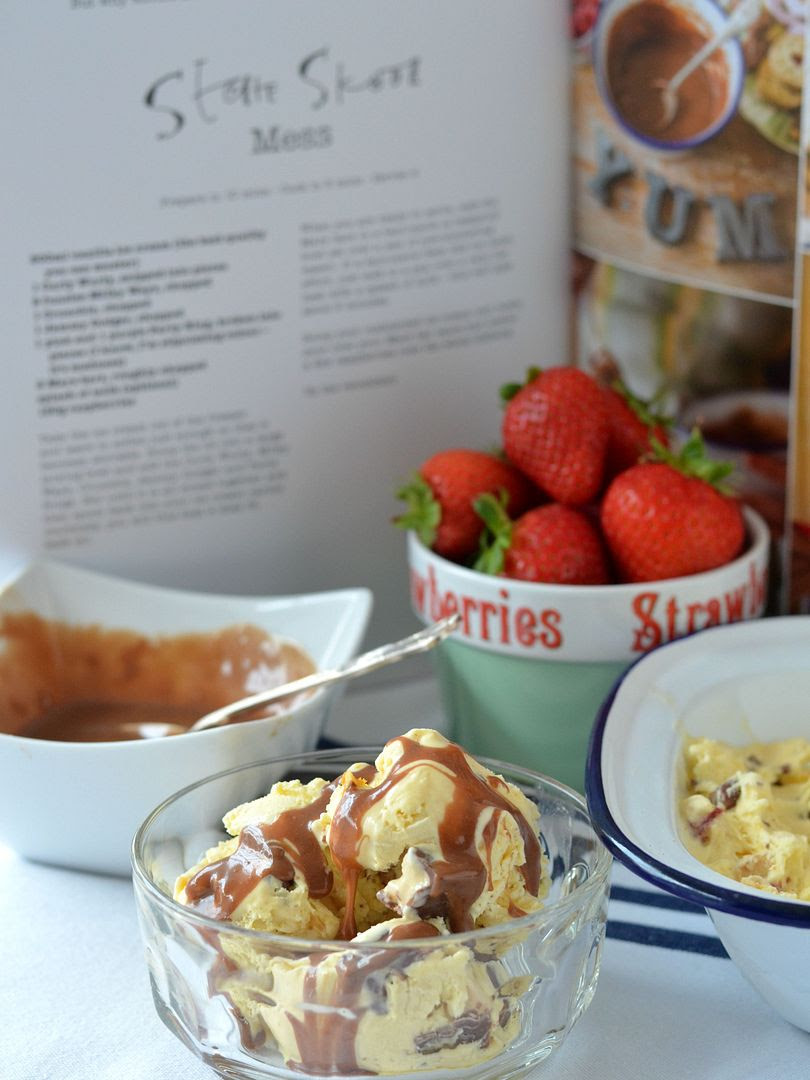 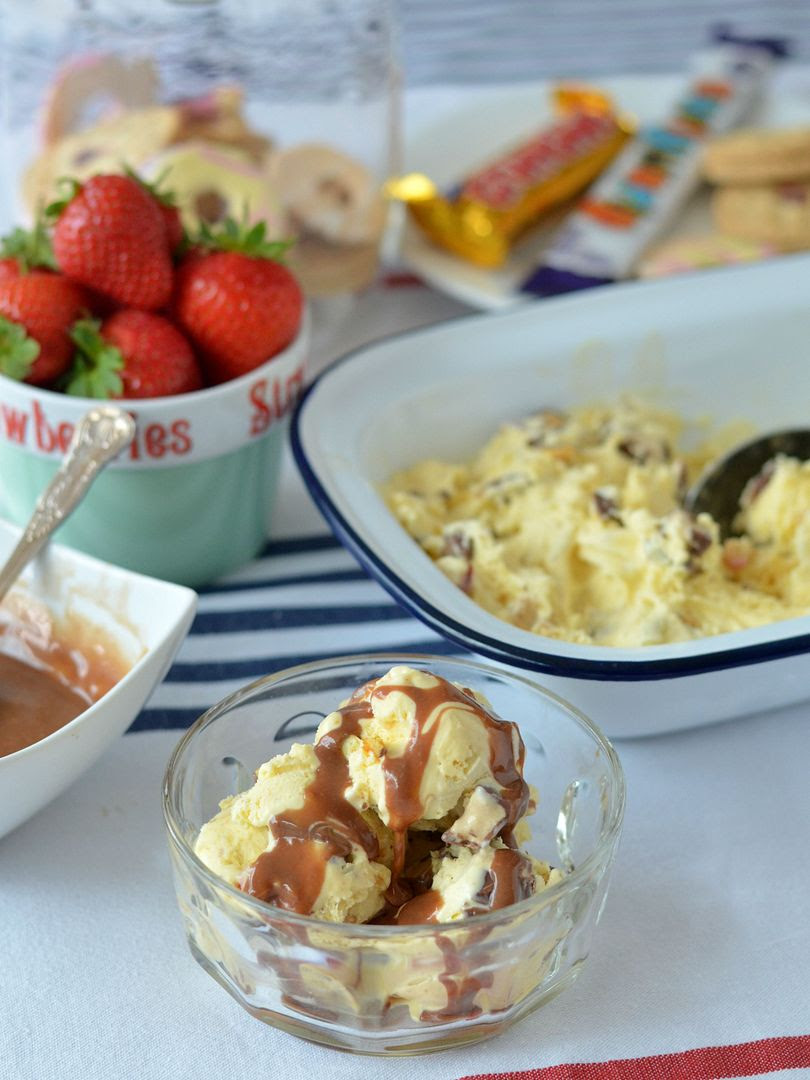 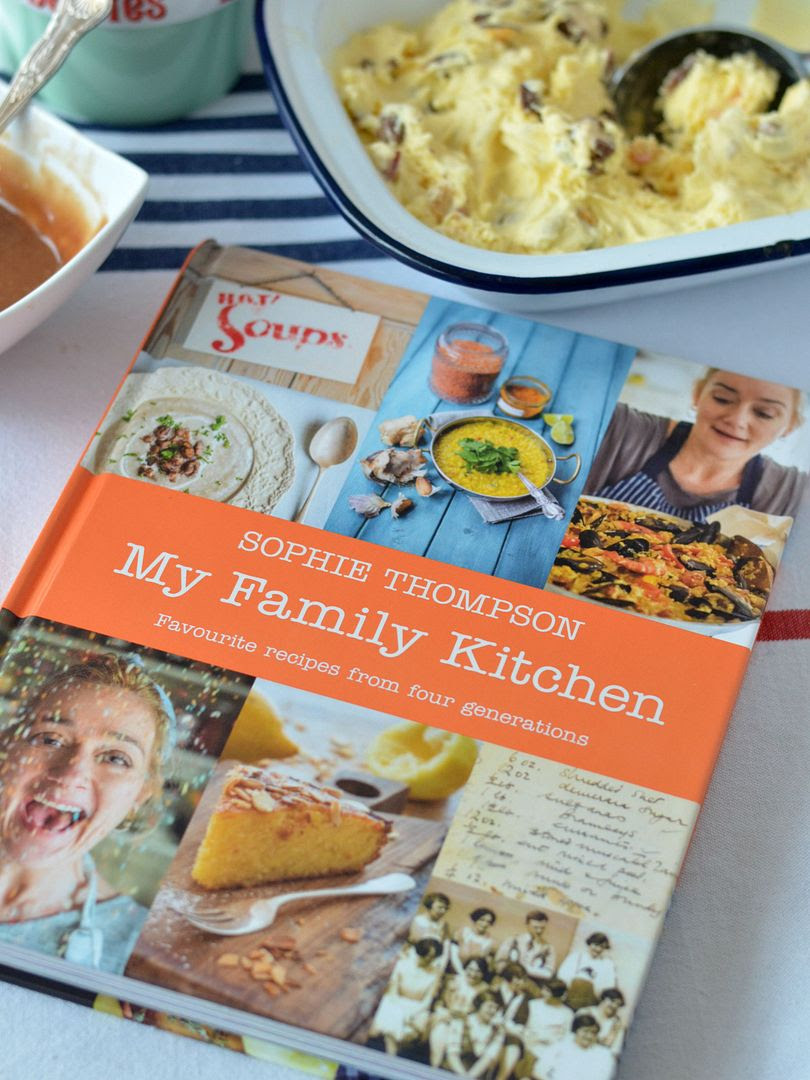 My Family Kitchen by Sophie Thompson is available on Amazon from 3rd September 2015 rrp £22.00

I received My Family Kitchen for the purpose of this review, and have been compensated to recreate a recipe, which has been published with permission.
Posted by Helen at 08:48
Email ThisBlogThis!Share to TwitterShare to FacebookShare to Pinterest
Labels: cookery book, ice cream, My Family Kitchen, recipe, review