There are many places to visit, but here are just a few that we visited during our two week stay near Moraira in our James Villas holiday villa.

Javea (also known as Xabia)
You won't find high rises in this coastal town, just a row of bars and restaurants along the seafront, and villas set into the hillside. The beach is pebbly and the water becomes deep quite quickly. Kids and adults can enjoy spending an active hour on the large inflatable in the sea for just 8 euros each. Life vests are provided and children under 12 need to be accompanied by an adult. Along the beach you'll also find windsurfing and fly boarding (75 euros for 30 minutes). Free wifi is available on the beach and parking is free along the beach front. 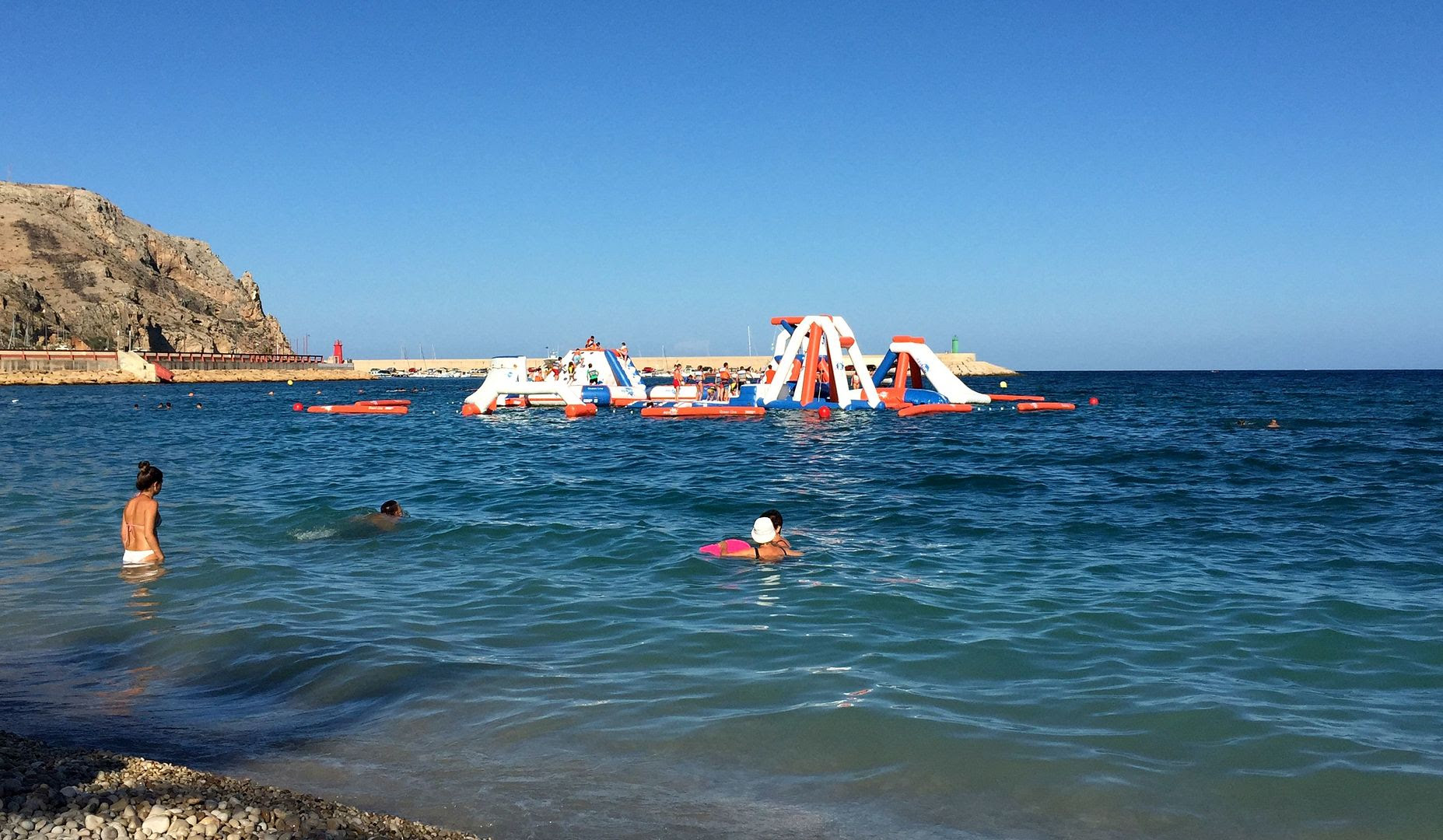 JAVEA BEACH
Moraira
The town boasts a few beaches and coves, with sunbathing on rocks jutting out from the coastline. The main beach is sandy, where there is a large inflatable where you can kick off some steam for 10 euros for one hour. At one end of the beach you can hire pedalos with a slide for just 20 euros for an hour, and around the coast a little there is a small sandy cove which seems to be popular with those with very young children, due to the shallow waters. Bars, restaurants and shops can be found alongside the beach, as well as many more within the town. There are various places to park for free, and free wifi is available on the beach. Towards the marina we found kayaks available to rent, along with jet ski tours for 140 euros per jet ski, for a 1.5 hour instructor led tour (up to 2 adults and 1 small child per jet ski).  In the evening there's a funfair on ground just behind the town, and a market on Friday selling fresh produce, shoes, clothing, handbags and souvenirs. 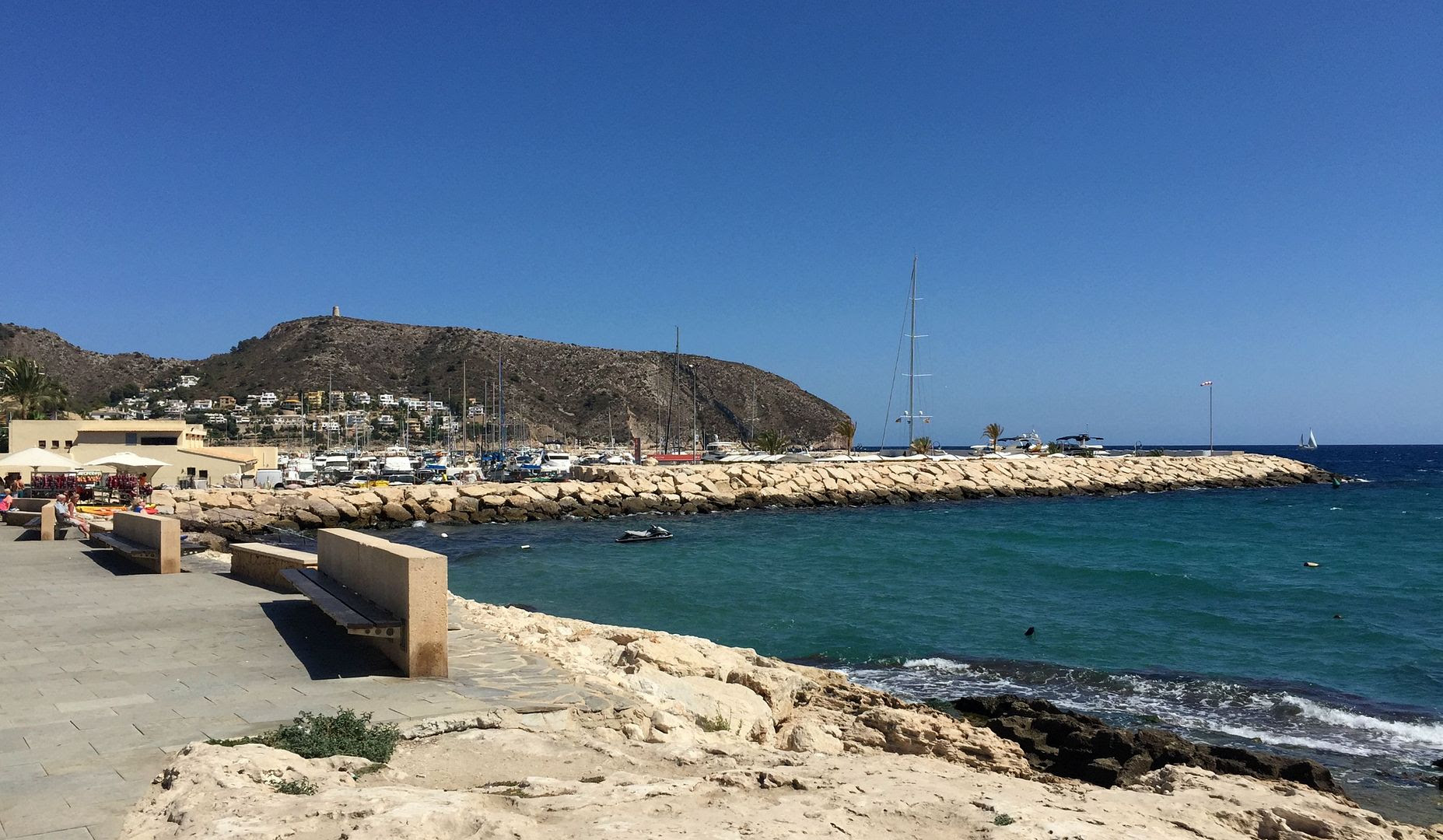 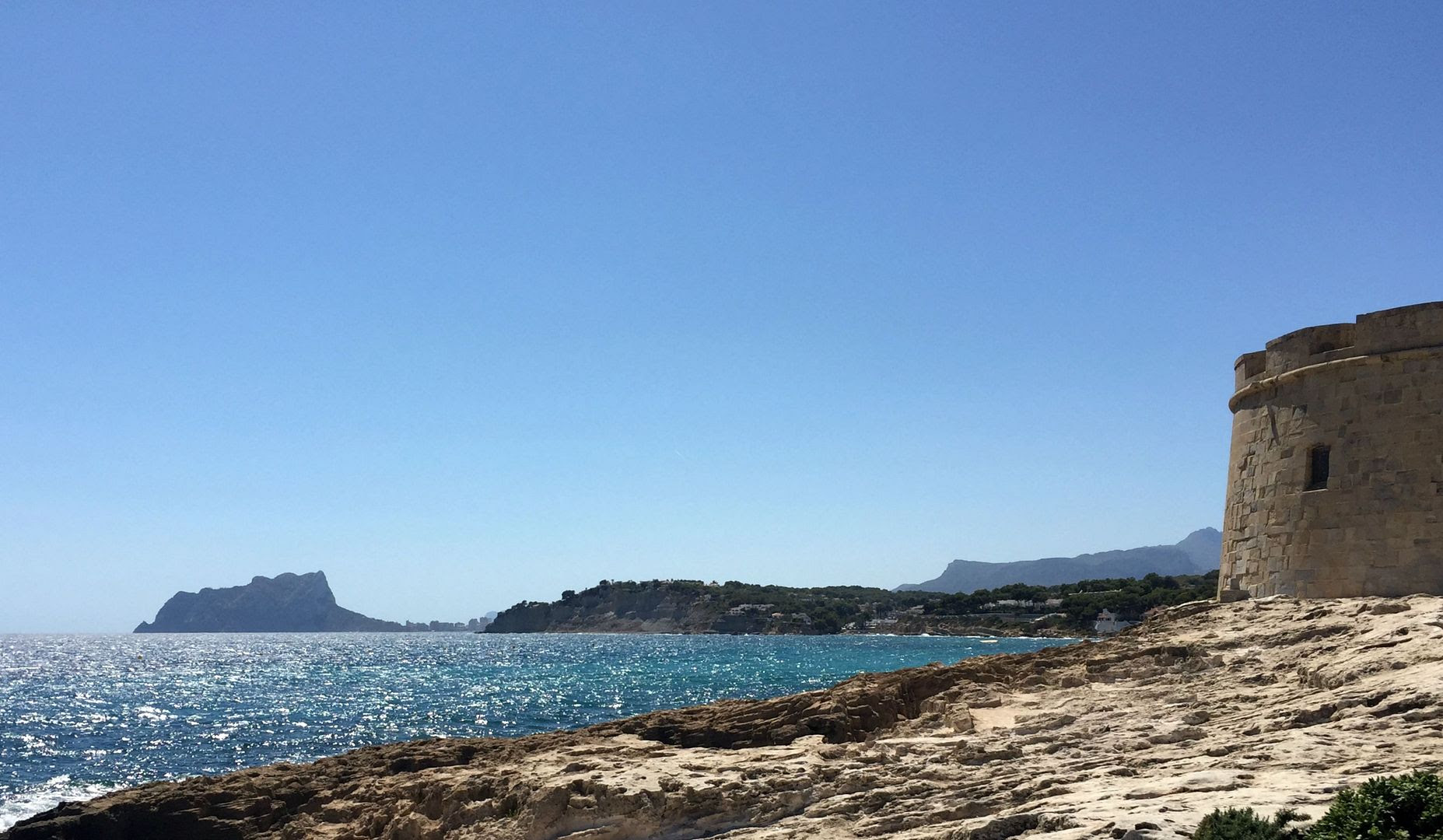 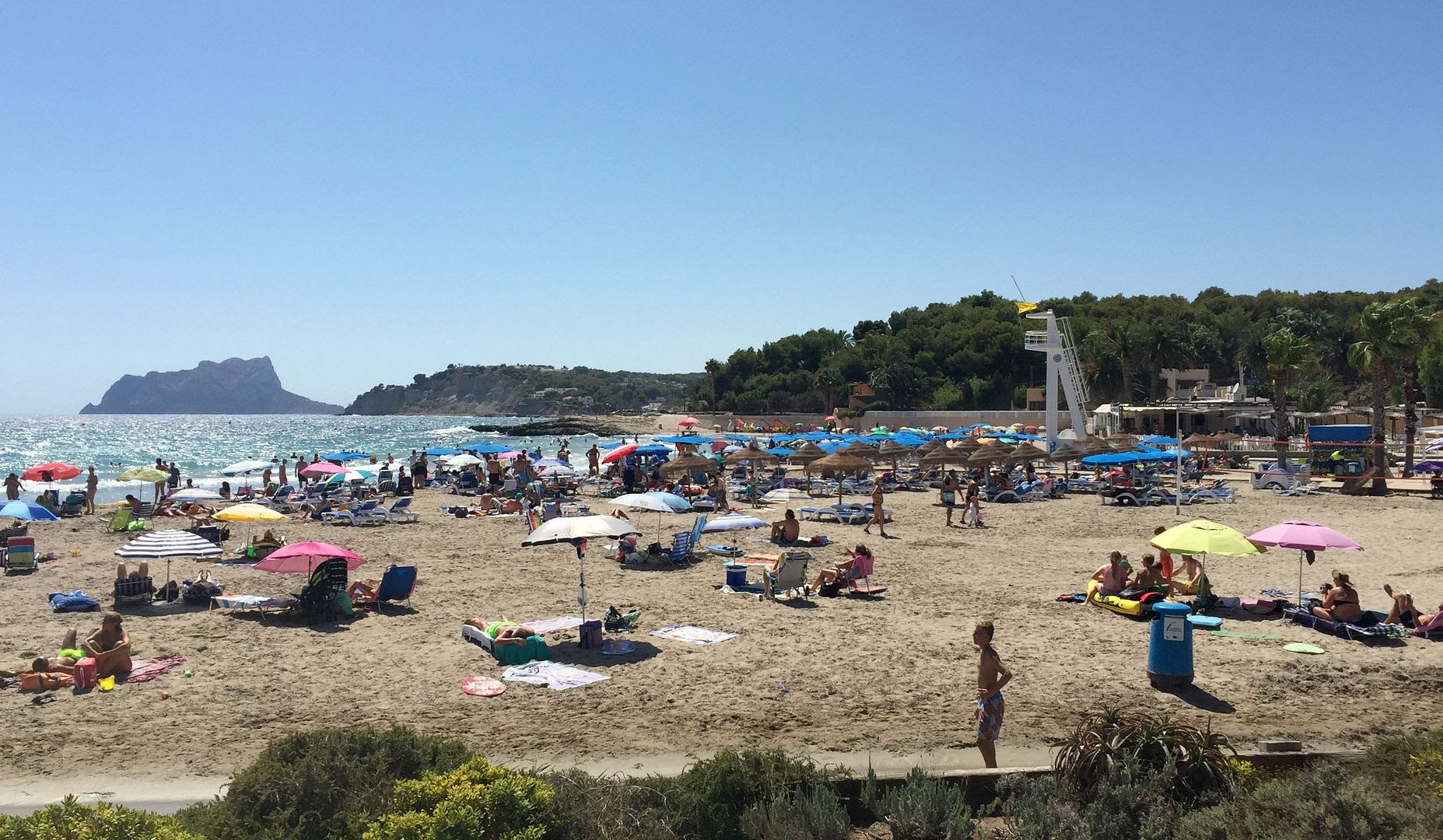 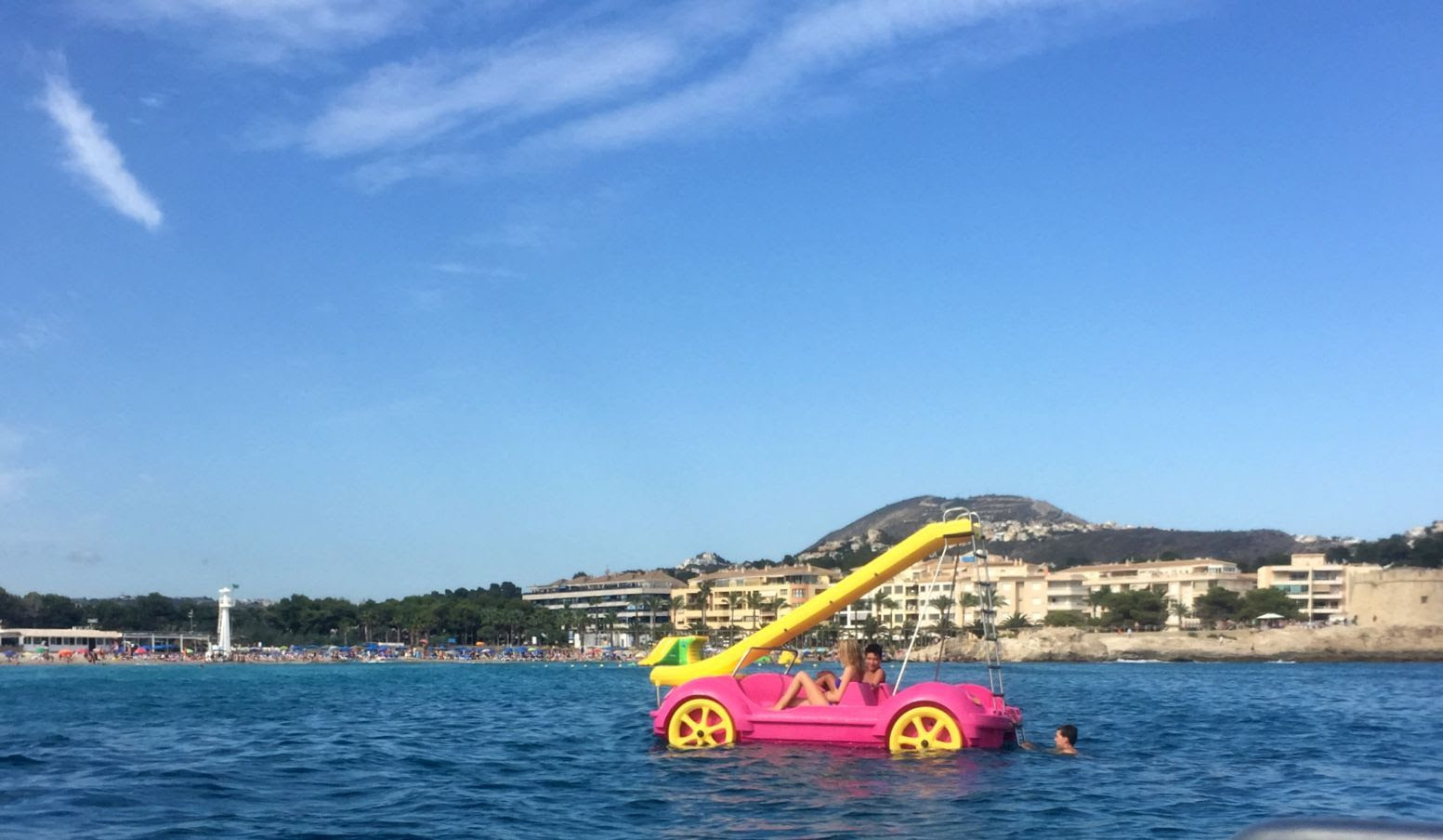 Aqualandia Benidorm
On the outskirts of Benidorm, and just 30-40 minutes from our villa near Benissa, set into the hillside, you'll find Aqualandia, a waterpark which is a great day out for all the family. We arrived at opening time, when it seemed to be least busy, and located a couple of sun beds around the main pool (5 euros each). There were still plenty of sunbeds available later in the day and the park never felt crowded. We hired two large donut rings (7 euros each + 2 euros deposit) which could be used in the pool and lazy river, and queue jumping at the rapids. There are a few shops and restaurants/snack bars dotted around the park, as well as covered picnic areas, changing rooms and lockers for hire. Parking is free in the large car park shared with Mundomar marine park next door. Entrance to the water park is 30 euros for adults and children over 12, and 24 euros for children. We booked a family ticket (2 adults and 2 children) online for 99 euros.

Altea
A coastal town between Benidorm and Calp. We visited on a Sunday, when it seemed to be very quiet along the streets, however many of the bars and restaurants along the seafront were bustling. Set back from the front was the bar of La Terrazza, where we enjoyed coffee, beer and ice creams. It was a popular place and the food being served looked great. Whilst we were there we noticed crowds gathering along the roadside and discovered that the La Vuelta (Spanish equivalent of Tour de France) was passing through shortly. 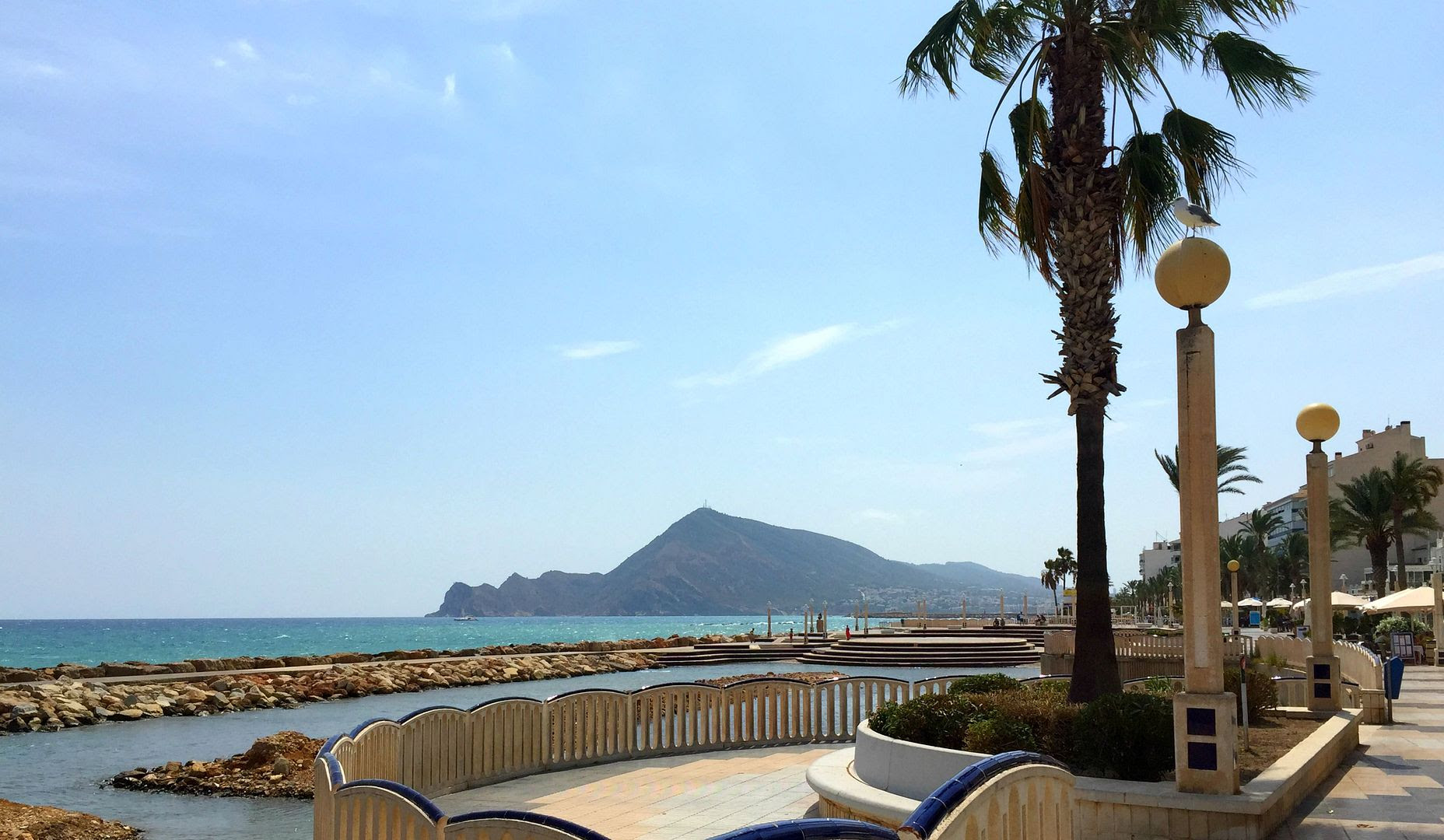 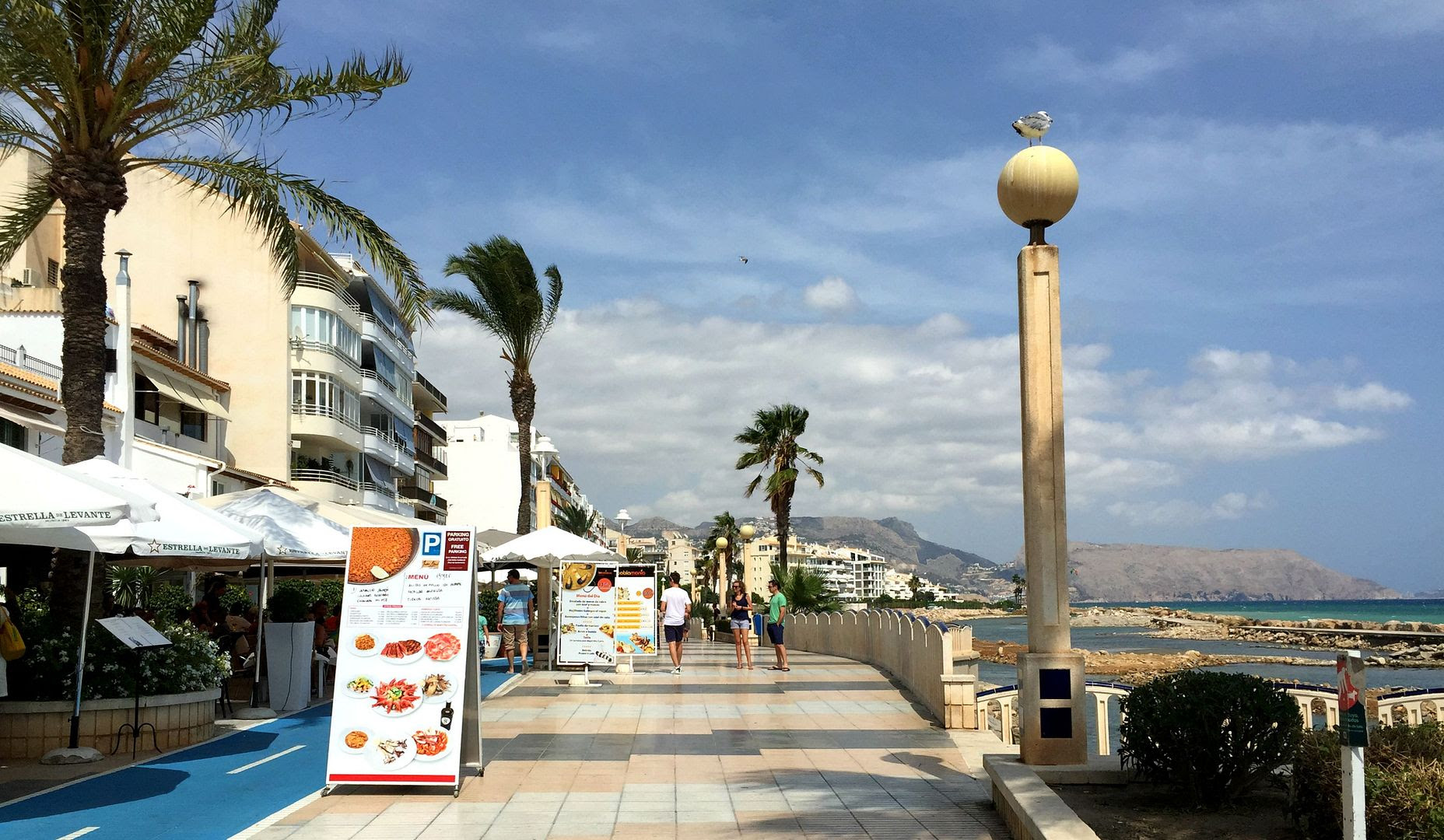 ALTEA SEAFRONT
La Nucia Sunday Market
Around 1 hour inland from our villa we came across the town of La Nucia where a weekly market is held on a Sunday. We arrived a little too late (midday) and the majority of fruit & veg stalls had packed up, leaving mostly stalls selling bric a brac.

Guadaleste
A few miles further inland, nestled among mountains, lies the small town of Guadaleste, which boats spectacular views towards the coast. There are castle remains, museums and gift shops to enjoy for a few hours. 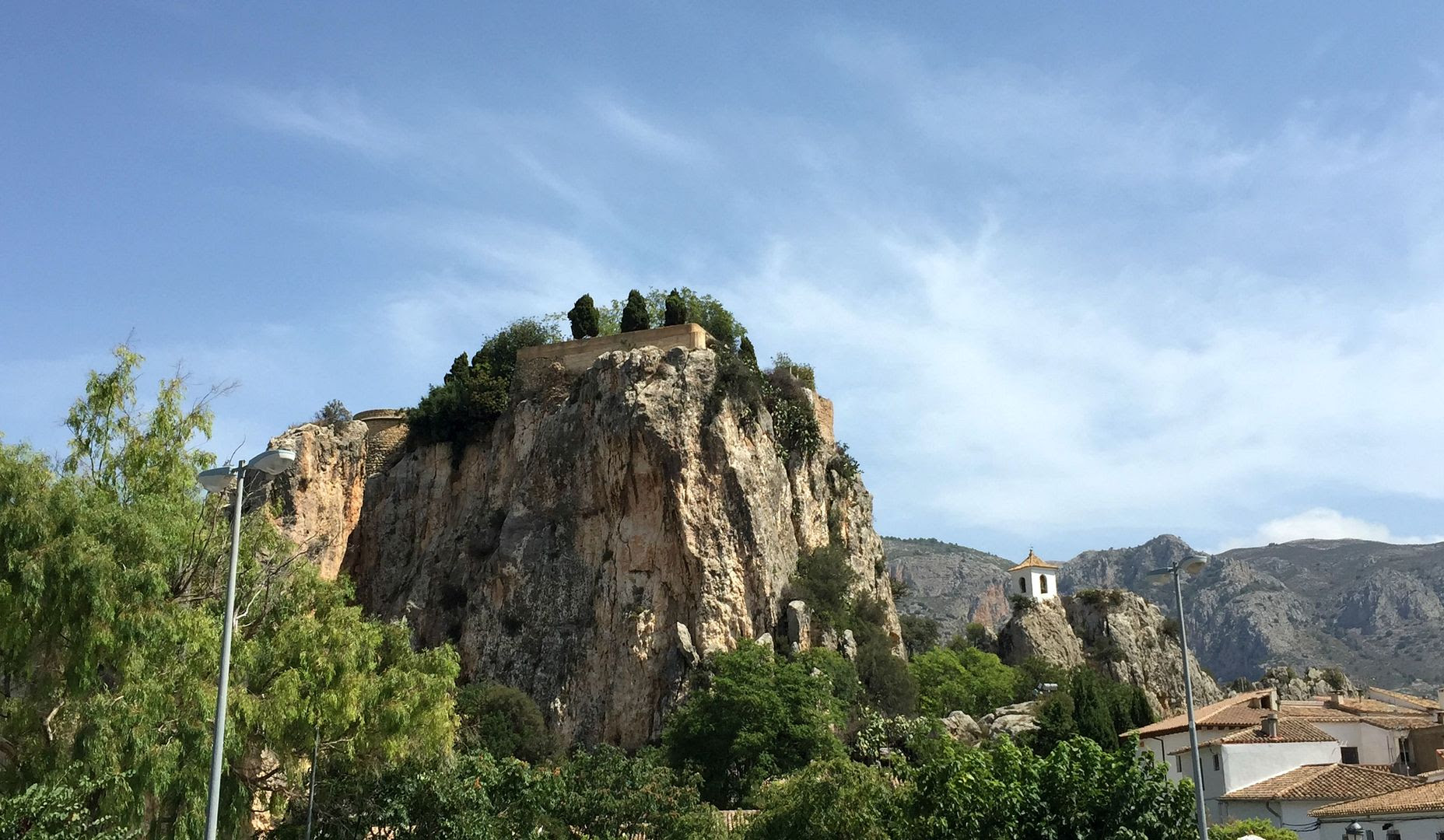 Local Beaches & Beach Bars
Less than 2 miles from our villa we discovered two small coves - that of Cala del Baladrar and Cala Advocat. Both are small beaches; Baladrar is pebbly and adjacent to Baladrar Beach bar, and Advocat has a sandy beach and small pier, ideal for sunbathing. There is also a beach bar here, along with a restaurant and hotel. 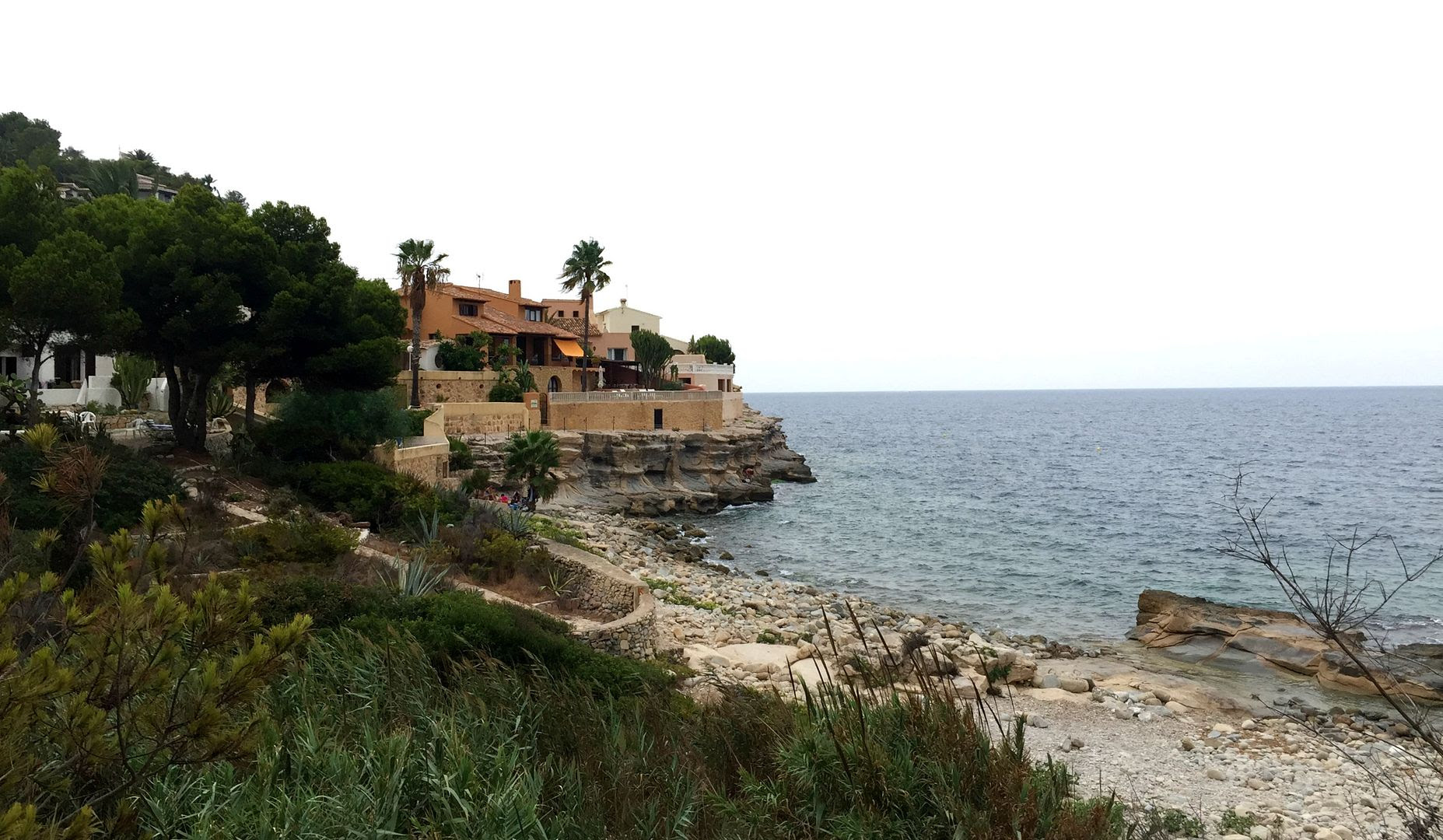 There's so much more to see than I've included here, such as the wine producing valleys of Jalon, waterfalls at L'Algar, and port of Denia where you can reach the island of Ibiza by ferry.


You can read more about our James Villas accommodation in my previous post here, and family meals in a holiday villa here.
Posted by Helen at 08:27
Email ThisBlogThis!Share to TwitterShare to FacebookShare to Pinterest
Labels: beaches, Costa blanca, holidays, spain, travel