It doesn't seem long since myself and Susan were making our Valentine Gingerbread Houses and to be honest I didn't really fancy making one for Easter but we did make a promise that we would make one for each event in the year as practice for our Christmas ones.

This one can't really be called a 'Gingerbread' house as it doesn't contain any ginger. I used the same recipe as I previously used but instead of using ginger and mixed spice I added cocoa powder.
I remembered from last time that I'd read a tip about rolling the dough out straight onto the baking paper and cutting it out on there - this avoids it going out of shape when you lift it onto the baking tray - it also avoids having to flour your worktop to prevent it from sticking, meaning less mess to clear up too!
This time instead of gluing it together with Royal Icing, which had taken too long to set last time as I'd made it too thin, I used Silver Spoon white chocolate cake covering, which sets really quickly. I thought it would also taste nice with the chocolate flavour house. I also stuck the house together on it's end which seemed easier than trying to make all 4 walls stand up at the same time.
I left overnight to harden up and decorated with more white chocolate cake covering and lots of Cadbury's mini eggs and Asda 'teeny weeny' chocolate eggs dipped in more cake covering to stick on. I ran out of mini eggs so unfortunately the roof wasn't completely covered.  As I used the cake covering instead of icing there was a lot less mess to clear up as the icing usually ends up in clouds covering the kitchen.
The house isn't my best effort and it's not very inventive but I think with all the chocolate and marshmallow bunnies it should taste good. 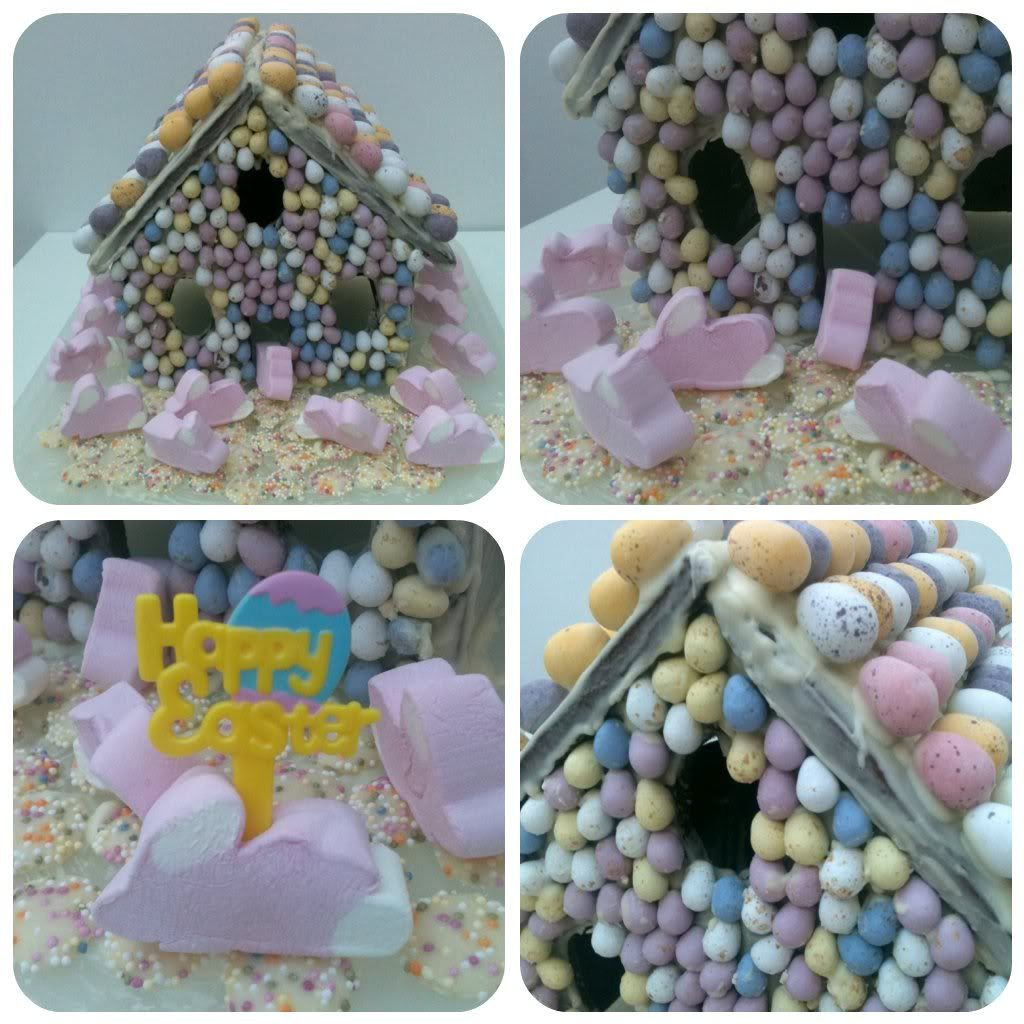 Don't forget to check Susan's house out too and feel free to join us over the Summer for our next one.

If you think my blog is worthy of a vote in the BritMums 'Brilliance in Blogging' awards please click on the badge below and vote for Jessies Crazy Kitchen, number 11 in the TASTY category

Posted by Helen at 17:55
Email ThisBlogThis!Share to TwitterShare to FacebookShare to Pinterest
Labels: gingerbread, recipe